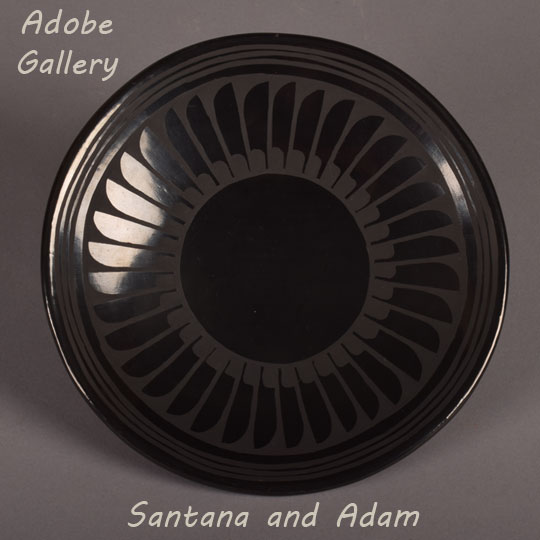 This excellent black-on-black plate made by Santana and Adam Martinez is about as perfect as one could expect.  It is perfectly shaped with a depth of over an inch and was stone polished to a beautiful luster. Santana painted fine eagle feathers and Adam performed an outstanding firing.  The plate is exquisite. Adam Martinez (1903-2000) was the oldest son of Maria and Julian.  Santana Martinez (1909-2002) was his wife. They both assisted Maria with her pottery production following the death of Julian in 1943.  Occasionally, they made pottery themselves—Santana forming the vessel and painting the design, and Adam assisting in gathering clay and firing the wares.  Because of their commitment to assisting Maria, they did not make a large number of pottery pieces as their time was limited.

"Santana came from an impressive background. Her brother was Awa Tsireh (Alfonso Roybal), considered by many critics to be the most talented of all Pueblo artists, and her mother was Alfonsita Martinez Roybal, an accomplished potter. Her uncle, Crescencio Martinez, was San Ildefonso's first painter, one of the most gifted artists, and a pottery decorator; his wife was Maria's oldest sister, Maximiliana. Her aunt, Tonita Martinez Roybal, was generally considered Maria's closest competitor in pottery making, and her grandmother, Dominguita Pino Martinez, was also one of San Ildefonso's better potters, known for her superior Black-on-red ware." [Spivey 2003:61]

According to Richard Spivey, "Santana continued working as Maria's partner until 1956, when Maria began a partnership with her son, Popovi Da. At this point, Santana began producing pottery on her own, first singing her pieces ‘Santana,' and then ‘Santana and Adam.' ‘When I started decorating,' she said, ‘I signed Marie and Santana, and then I started just signing my name, not with Adam then. Some white people were here and said they had seen one of my pots in a grocery store—it was a Santo Domingo pot with ‘Santana' on it. That's when we started signing Santana and Adam." [Spivey 2003:64]

Not only did Santana and Adam leave a legacy of their collaborations with Maria, but they also left a legacy of their own pottery, although limited in quantity. Another legacy is their daughter, Anita Martinez, their granddaughter, Barbara Gonzales, and her son Cavan Gonzales. It is these younger potters who are carrying on the legacy of Maria and Julian Martinez.

Condition: this Exquisite San Ildefonso Pueblo Black on Black Plate by Santana and Adam Martinez is in very good condition

Provenance: from the collection of a gentleman from Illinois