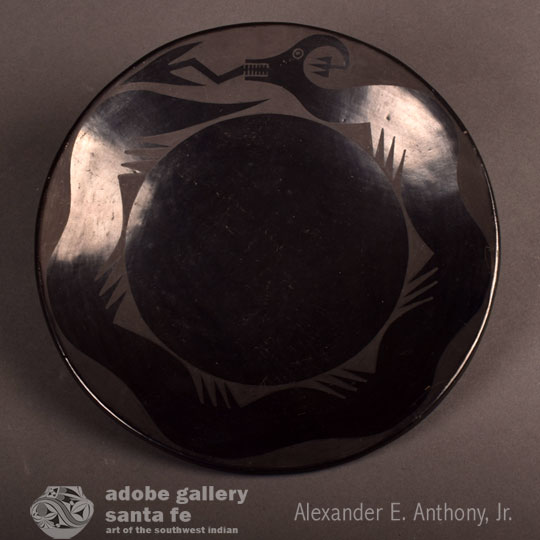 This San Ildefonso Pueblo Black on Black Pottery Dish by Rosalie Simbola Aguilar has a two-inch wide band around the outer edge of the area in which the artist placed an Avanyu design.  The dish is not signed with the name of the potter but the Avanyu has been favorably compared to other examples made by Rosalie Aguilar and painted by her husband Joe.  It is based on this absolute exact comparison that an attribution to Rosalie Aguilar has been made.

Rosalie Simbola Aguilar (1898-1947) was originally from Picuris Pueblo.  In 1922, at the age of 24, she married Joe Aguilar (1898-1965) of San Ildefonso Pueblo and they settled there.  The couple had eleven children over a period of twenty-four years, yet, Rosalie and Joe found time to produce beautiful pottery in the San Ildefonso style. Rosalie, in addition to producing Black-on-black pottery also made carved designs.  She and Rose Gonzales were the only two potters at the pueblo to do carved wares and both were imports from other pueblos.

Jonathan Batkin included Rosalie in his article “Three Great Potters of San Ildefonso,” published in American Indian Art Magazine in 1991.  That gives one an idea of just how great she and her husband were at making pottery.  Joe had painted pottery for his mother, Suzanna Martinez Aguilar, and was an exceptional painter.  Kenneth Chapman listed Joe among 15 potters at San Ildefonso who painted pottery before 1940. Joe’s son, Alfred Aguilar, said that his dad formed pots as well as painted them.  If so, he would have been among the earliest males to do so. It is possible that Joe painted this dish.