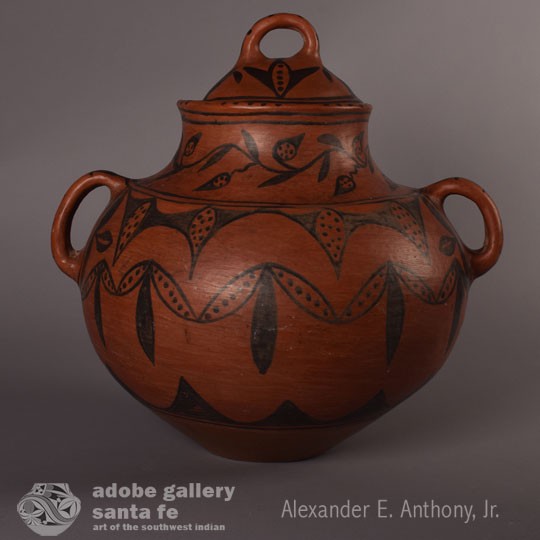 This large San Ildefonso Pueblo Black-on-red pottery storage jar with a lid and lug handles was made by Dominguita Pino Martinez around 1890-1900.  Dominguita is known for having made magnificent large Black-on-red pottery. She collaborated with several others to paint her pottery.  Some of her collaborators were her son, Crescencio Martinez, her daughter Tonita Roybal, her husband Santiago Martinez and son-in-law Alfredo Montoya.

The designs strongly suggest a floral intent.  The vine around the neck has leaves and seed pods.  Just below the neck a band continues the seed pod theme and perhaps even the design band below that represents seed pods.  Germination is the theme of the jar. The design on the lid follows the same theme. The lug handles reinforce the size of the jar through their necessity.  The designs might also be interpreted as corn designs.

Jonathan Batkin, currently the director of the Wheelwright Museum in Santa Fe, authored an article in American Indian Art Magazine, in 1991, in which he discussed three great potters of San Ildefonso Pueblo, and Dominguita Pino was one of the three he chose. He stated that Dominguita and her husband, Santiago, along with their children, “made some of the most beautiful pottery of the early twentieth century.  Like her contemporaries, Ba Tse and Martina Vigil, Dominguita made some extremely large vessels.” Dominguita’s children were Cescencio Martinez, Alfonsita Roybal, and Tonita Roybal. One of her grandsons was Alfonso Roybal (Awa Tsireh).

Contition:  at over 120 years of existence, this jar has remained in excellent condition.  The fact that it still has the handles and the lid is remarkable

Provenance: this Historic San Ildefonso Pueblo Black on Red Lidded Pottery Jar with Handles by Dominguita Pino Martinez is from the collection of a gentleman from Santa Fe.