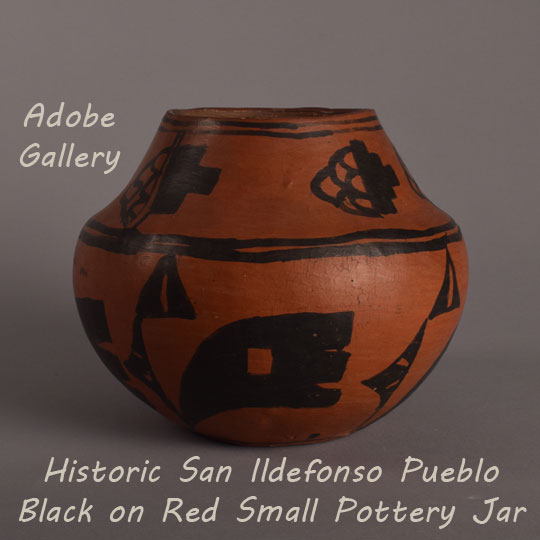 At first glance, one would suspect that this was made by Martina Vigil (1856-1916) and painted by Florentino Montoya (1858-1918) because of the large black fan emblem on the body.  That emblem, with slight changes, is seen on many documented vessels by them.  We have not specified that they are the artists because the painting is not as tight as Florentina normally did.  It is looser in style and less perfected.  It is quite possible, however, that it was one of his later efforts in the last few years of his life, but we cannot prove such.

The jar is traditional to San Ildefonso, as are the designs.  It probably dates to 1910-15, a period that would agree with Florentina’s last years.

Condition: very good condition with no apparent repairs.  Close up view below shows the crackling of the slip—similar to an old fine oil painting (desirable).

Provenance: this Historic San Ildefonso Pueblo Black-on-red Small Pottery Jar, circa 1910-1915 is from a gentleman in Santa Fe