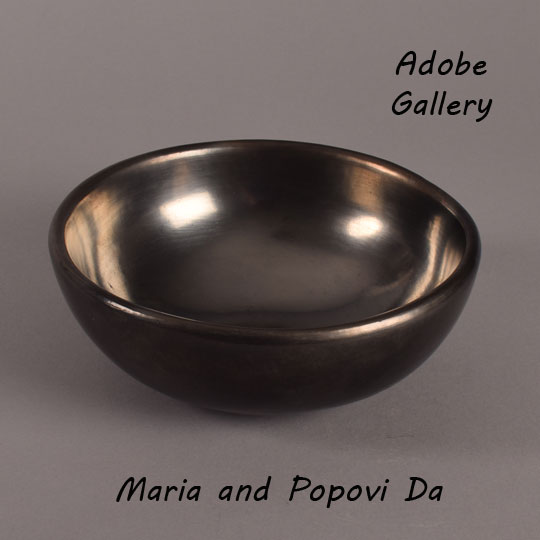 This beautiful stone-polished black pottery bowl was a collaborative effort by San Ildefonso Pueblo artists Maria Martinez and her son, Popovi Da.  It is signed on the underside Maria/Popovi and dated 1167 (November 1967). Pieces by Maria and Popovi that have a date inscribed are among the most popular with collectors.

Popovi Da (1922-1971) began collaborating with his mother, Maria Martinez (1887-1980), on her pottery in 1956, following a period when Santana (married to his older brother, Adam) had been assisting her mother-in-law.  Popovi and his mom worked together until his death in 1971. Popovi worked with Maria in all aspects of pottery preparation and their pieces were co-signed. When Popovi died, Maria essentially retired. Popovi initiated the process of adding the date to his and Maria’s pottery in 1959. Prior to that, they were just co-signed with their names.

Maria’s sister, Clara, spent most of her adult life polishing pottery for Maria.  Clara was deaf so Maria supported her with this work. It is quite likely that Clara polished this bowl, then Popovi Da fired it.  Popovi was a perfectionist in his work and that is quite evident in this bowl as it is a beautiful bowl with a highly reflective gun metal burnish on the interior and deep black on the exterior.

In 1948, Popovi and his wife, Anita Da, following his assignment at working on the Manhattan Project at Los Alamos, opened the Popovi Da Studio of Indian Arts at San Ildefonso Pueblo.  Originally, the plan was to have an outlet for the sale of Maria’s pottery, so that she could concentrate on her work without having to sell it herself.  Additionally, it would provide him a place to paint and sell his art.  The Da’s soon found that they needed more inventory, so they began purchasing pottery from the finest artists.  It was not long before the Studio became famous as having the finest Indian art.  There were no curio items, only fine art pieces. [Spivey, 2003:91]

This bowl was purchased from Anita Da, wife of Popovi, at the Studio on San Ildefonso Pueblo.