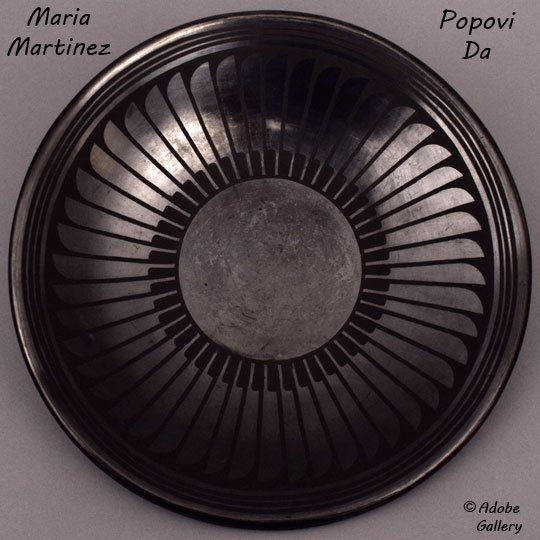 This black-on-black pottery plate is designed with the eagle feather layout borrowed from the Mimbres culture of a thousand years ago.  Julian Martinez was the first to apply this design to the pottery of his wife, Maria Martinez.  It has become a favorite design of collectors.   Painting such a design freehand approaches the impossible—impossible to keep the width of each feather equal, impossible to have the layout come to an end consistent with the beginning, and impossible not to smear the matte pigment during the application.  Julian was excellent in overcoming these impossibilities, and so was Popovi Da, as illustrated with this plate.

Maria made this in the depth of a shallow bowl which elevates the feather design so that it is more visible for viewing.  It’s subtle things like this that make the manufacture of pueblo pottery an art form.  Thought is always given when making pottery as to the display of the design.  Additionally, a shallow shape fires safer than a flat shape.  A flat tile of this size would most likely crack during the manufacture whereas the shallow bowl is stronger during drying and firing.

Maria was a master artisan in crafting pottery in a variety of shapes, and Julian, Santana, and Popovi Da adapted well to placing designs to fit the shape of the pottery.  The feather design and the Avanyu design are well suited to the shape of shallow bowls and plates. This plate is cosigned Maria Popovi and does not have a date, so it was made in the period before Popovi added dates— between 1956-1959.  Popovi continued using designs started by his dad—eagle feathers and the Avanyu (water serpent). Later, he began using other designs of his own ideas.

Popovi Da (Red Fox) had begun collaborating with his mother on her pottery in 1956, following a period when Santana (married to his brother, Adam) had been assisting her mother-in-law.  Popovi and his mom worked together until his death in 1971. Popovi worked with Maria in all aspects of pottery preparation and their pieces were co-signed.  When Popovi passed away, Maria essentially retired. Popovi initiated the process of adding the date to his and Maria’s pottery in 1959. Prior to that, they were co-signed only with the two names.

Provenance: this San Ildefonso Pueblo Black-on-black Pottery Plate signed Maria Popovi is  from the collection of a family from New Mexico