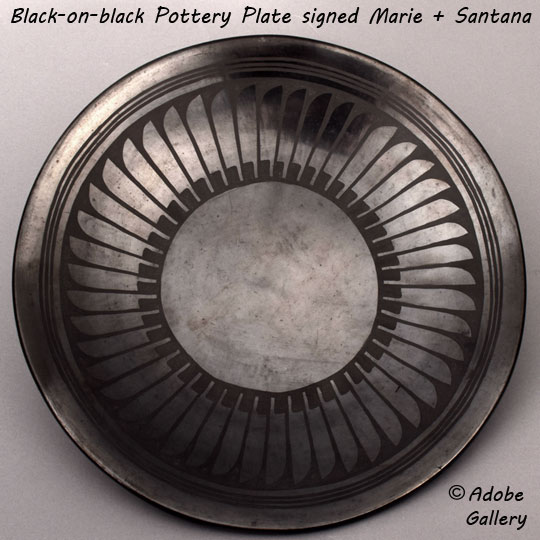 Maria Martinez was the matriarch of San Ildefonso pottery, and her pieces never fail to enchant.  She made pottery for the better part of a century and collaborated with many of her talented family members.  Stories float between biographies and individuals surrounding Maria’s skills and generosity of heart.  It is easy to imagine enjoying the process of either learning from her or working with her. In the case of this pleasing feather plate, Maria was assisted by her daughter-in- law, Santana. It is signed, Marie + Santana, the earlier period signature when Santana assisted Maria following Julian’s death in 1943.  This phase of their collaboration lasted about 10 years, when Popovi Da began assisting his mom.  It was Julián Martinez (1885-1943) Pocano, Maria’s husband, who was credited with originally incorporating San Ildefonso pottery with the ancient Mimbres eagle feather design.

Gracefully curved from its base to form a shallow depth, this plate is framed with three parallel lines encircling the rim. The main body design of Mimbres-style eagle feathers predominates the visual stimulus. Here, a matte portion was carefully designed to outline the eagle feathers across the plate’s inner circle, reaching just below the rim.  The effect is quite mesmerizing and makes the plate both refined and visually engaging.

Although the process of making pottery was developed between husband and wife in her earlier life, Maria was somehow able to move through the loss of Julian with a continuity of artistic creation.  There may have been a healing element to her undertaking, or potentially an undying drive to create, alongside the need to support her family. With this iconic plate she worked with her daughter-in-law and the result was yet again, something astounding.

San Ildefonso Pueblo artist Maria Martinez (1887-1980) Poveka is probably the most famous of all pueblo potters. Noted authority Richard Spivey sent Adobe Gallery the following comment which we are pleased to print: “Maria retired from pottery making in October 1970; she made no pottery for the commercial market after that time. Santana did not pick up on painting Maria's pottery after Po's death since Maria was no longer potting.”

Provenance: this San Ildefonso Pueblo Black-on-black Pottery Plate signed Marie + Santana is from the collection of a gentleman from New Mexico