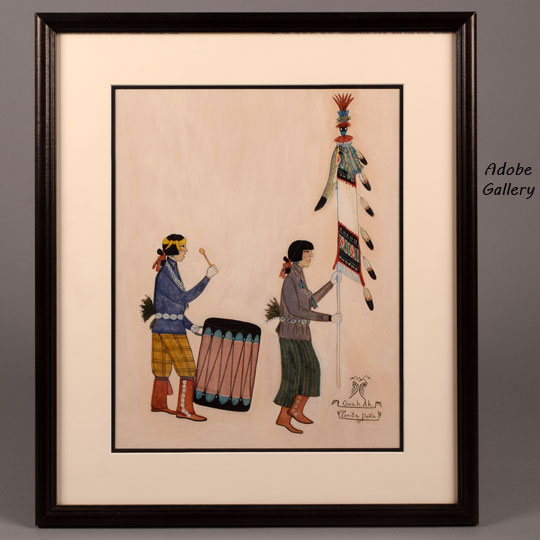 This original painting was created in the 1930s or 1940s by San Ildefonso Pueblo artist Tonita Peña.  The image features two pueblo people performing a Corn Dance.  On the right, a man holds a tall and elaborate flag.  On the left, a drummer follows, raising his drumstick and opening his mouth in song.  All of this, of course, is typical of Peña’s work, but these dancers are particularly strong in color and rich in texture.  A close look reveals some of the finest work we’ve seen from Peña.

The painting’s most immediately striking attribute is its gorgeous color scheme.  Peña’s beautiful blues, greens and yellows look as though they were painted yesterday.  Each tone is rich and attractive, with layered paints creating interesting textural variations in certain areas.  Peña elevated these colors’ effects by painting the entire background white, covering what looks like a light brown color.  This was an unusual but effective decision.  The figures themselves are excellent, and the tall flag features some of the finest detail we’ve seen in Peña’s work.  This is a truly wonderful example of Tonita Peña’s work. The painting is signed Quah Ah and Tonita Peña in lower right, with an elaborate storm motif.  This identifies the piece as having been completed after 1930.  The painting is framed tastefully, using a carved wood frame and a white mat board with a black interior band.

Provenance: this Colorful Pueblo Corn Dance Scene by Tonita Peña is from a private collection