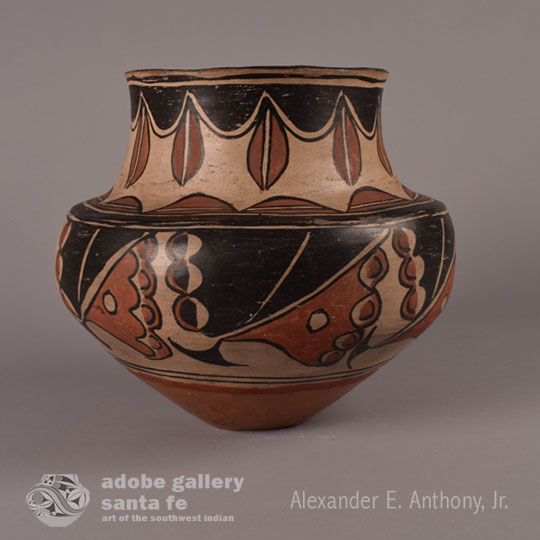 This traditional Tewa shaped pottery vessel was exquisitely formed and beautifully painted.  Martina Vigil Montoya and Florentino Montoya were the finest potters at San Ildefonso Pueblo from as early as the 1880s.

The cream slip on this pottery jar was stone-polished, an indication that the jar pre-dates 1905 most likely. It has become accepted that potters at San Ildefonso switched from its stone-polish slip to the Cochiti Pueblo rag-polish slip around 1905. We suspect, however, that every potter did not make the change at the same time. Some of the potters may have chosen to continue using the San Ildefonso slip because they were familiar with its characteristics. It is quite likely that some of them may have not changed until a decade later, if at all.

Although there were about 8 potters at San Ildefonso Pueblo in the early 1900s, there seems to have been only one family who produced such bold designs- Martina Vigil Montoya (1856-1916) and Florentino Montoya (1858-1918). They were masters at creating magnificent Polychrome pottery jars. Martina had learned pottery making from her mother, Toña Peña Vigil, who also was a very talented potter. Florentino had studied the designs of Toña's pottery and adapted his style on hers.  Florentino Montoya also possessed the artistic talent that permitted him to select the correct treatment for Martina’s jars. He had an inherent talent for visualizing the layout and shapes to perfectly fit the areas on which he was painting.  The design he chose for this jar is a perfect fit for the shape of the vessel, both above the midpoint and below the midpoint. It displays the boldness of Florentino’s style.  It is quite possible that this jar was made by Martina and painted by Florentino in the late 1800s or around 1900.

The V-shape design on the body, painted red and outlined in black, has been associated with Florentino on numerous occasions.  It is this, along with other designs, that reinforces them as a potter and painter of this jar.

Provenance: this San Ildefonso Pueblo Historic Polychrome Pottery Jar by Martina Vigil and Florentino Montoya is from a gentleman in Santa Fe