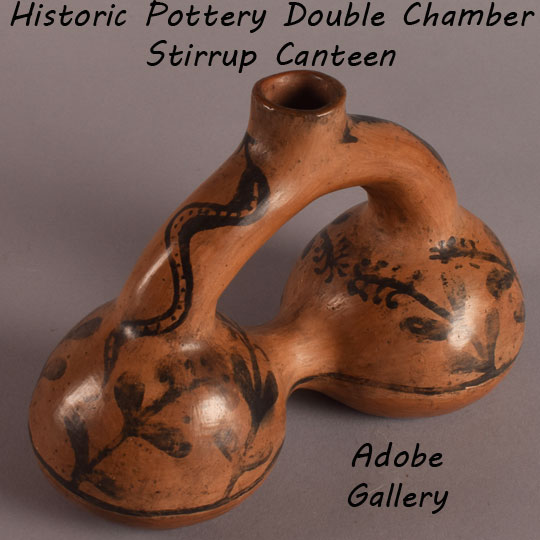 The designs on the globes are floral—long stems with leaves and seed pods at their ends.  Climbing up each of the arches is an Avanyu (water serpent) that is outlined in black and filled with dots.  Each Avanyu has an arrow shooting from its mouth which signifies lightning.  Plants, Avanyu, and lightning are all symbols of water, appropriate for a canteen.

The function for which such an historic canteen was made is not known.  It has been stated that they were used in ceremonial occasions, such as baptism, weddings, and such, but I have not found reference to that in any published document.  The two chambers are connected so that liquid can flow from one to the other.

Francis Harlow stated that there began to appear pseudo-ceremonial ceramics at San Ildefonso in the early 1900s, being made at the request of anthropologists.  They are identified as pseudo-ceremonial by their sharp departure from the prevailing design styles of true ceremonial ceramics and the lack of wear from use in pueblo ceremonies. [Harlow, 1965:20]   Harlow further states that “The early nineteenth century saw some exotic ceremonial jar forms suggesting ancestry to the modern wedding jar.” [Harlow, 1965:18]

We are left to accept the double lobe stirrup canteen as a mystery.  It may have been ceremonial or maybe pseudo-ceremonial.  It may have been ancestral to the wedding vase or not.  Regardless, it is an intriguing vessel shape and its mystery adds to its interest.  There is no evidence of prior use.