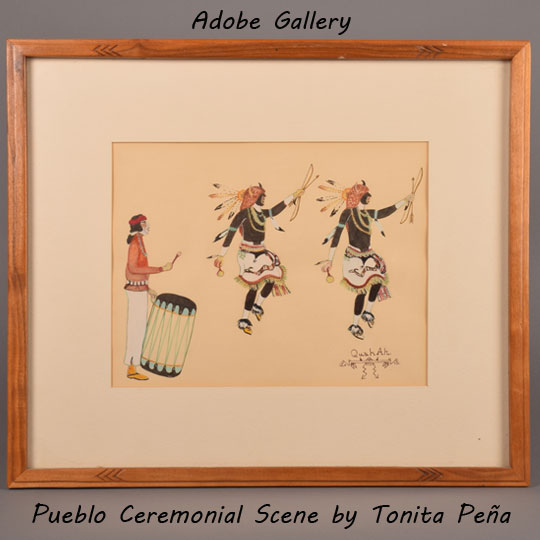 This original watercolor painting was created by San Ildefonso Pueblo artist Tonita Peña.  Peña’s subject in this piece is a ceremonial Buffalo Dance.  Her depiction includes three figures—two Buffalo Dancers and one drummer.  The image as a whole feels energetic and colorful.  It is a fine example of Peña’s work.

Peña utilized a larger-than-usual color palette for this piece, adding a wide variety of soft tones to her subjects’ clothing.  The two dancers’ movements—left arms and legs raised; heads turned slightly left—feel accurately expressive.  The drummer follows behind them, positioned slightly lower within the image.  He’s depicted in profile, while the two dancers he follows are turned slightly toward the viewer, allowing a look at the details of their clothing.

It is marked with the signature that she began to use in the early 1930s.  The painting is signed Quah Ah. in lower right, and embellished with a decorative rain cloud design.  It is framed in a thin wood frame with carved accents.