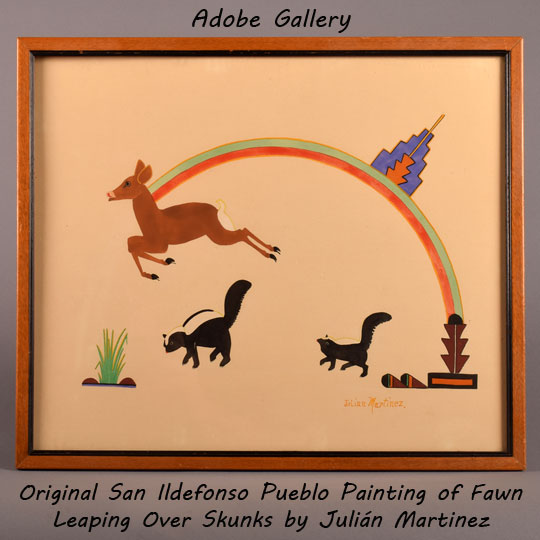 This untitled original painting was created by Julian Martinez of San Ildefonso Pueblo.  Martinez was a significant figure in the history of Pueblo Indian artwork.  It is always exciting to come across his works on paper.  This painting is a particularly charming offering that manages to feel unique while using somewhat familiar imagery.  Martinez’ subject here is a fawn leaping over a pair of skunks.  The smaller of the skunks looks upward, as if it’s curious about what’s passing overhead, while the larger skunk strikes a defensive pose.  The fawn, meanwhile, stares straight ahead as it gracefully clears the pair of skunks.

A multicolored rainbow design traces the fawn’s path.  This design originates in the lower right corner with a group of geometric figures in earthy orange and brown.  Bright red, green and yellow lines form the rainbow.  A blue and orange kiva step design emerges from the rainbow, pointing directly toward the upper right corner of the image.  A single plant and a pair of brown rocks signify the ground below, resting right where the fawn will land. Their position directly in the fawn’s path seems to connect  the image’s elements.   This is a fine example of Julian Martinez’ work as a painter.

The painting is signed Julian Martinez in lower right.  It is framed in a thin wood frame with a black interior band.

Julián Martinez (1885-1943) Pocano - Coming of the Spirits was an artist who was born, lived most of his life, and died at the small but artistically rich San Ildefonso Pueblo. He is perhaps best known for painting designs onto the pottery vessels created by his wife—the famous San Ildefonso potter Maria Martinez.  He painted works on paper, too, and did so successfully despite receiving no formal art education. He was the father of Popovi Da and the grandfather of Tony Da, both of whom went on to become famous and successful artists themselves. Martinez was an important part of two major artistic movements: the beginnings of both black-on-black San Ildefonso pottery and traditional “flat style” pueblo painting.

Martinez’ works on paper are considered most rare, simply because he didn't have time very much to paint.  Besides painter and pottery designer, his various occupations included farmer, laborer, Museum of New Mexico janitor, and Governor of San Ildefonso Pueblo.  According to Jeanne Snodgrass’ American Indian Painters: A Biographical Directory, Martinez began painting around 1920.  He mostly painted traditional pueblo “flat style” depictions of pueblo dancers, but occasionally strayed away from tradition and towards abstract symbolism. Martinez' paintings were among those selected by Mary Jane Colter to decorate La Fonda Hotel in Santa Fe, New Mexico. He received several commissions for murals, which can be seen at the Santa Fe Indian School, Mesa Verde National Park, and the School for Advanced Research in Santa Fe.

Condition: Excellent condition. A few minor discolorations are visible near the edges, from previous non-archival framing materials.  These materials have been replaced.

Provenance: this Original San Ildefonso Pueblo Painting of Fawn Leaping Over Skunks by Julián Martinez is from a private collection of a Canadian family