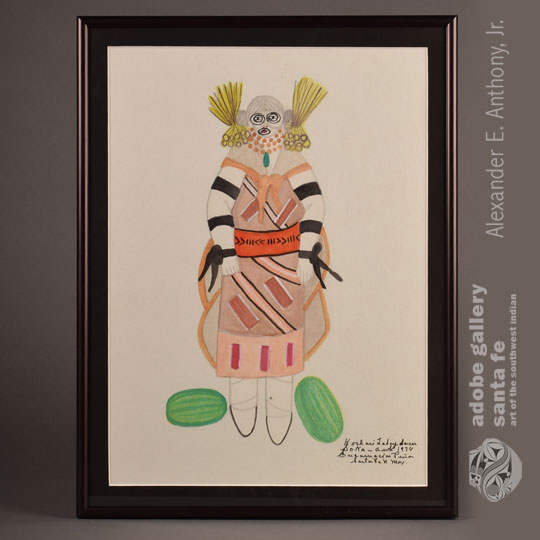 This painting by San Ildefonso Pueblo artist José Encarnación Peña features a subject we don’t often see in pueblo paintings: a female koosa clown.  Female koosa clowns participate in various Tewa dances and are similar to female katsinas in that they are actually performed by men. As per the artist’s usual, the subject faces the viewer directly and is composed in an appealingly simple manner.  She wears a colorful dress, moccasins, and jewelry, all of which is consistent with Peña’s established style.

Her face is wonderful—unusual, without a doubt, but in an alluring way.  It’s made of circles set within circles, first in light gray to define her hair and face and then in bold black to create her lips and eyes.  Peña chose non-naturalistic colors—bright yellow and purple—for his subject’s corn husk hair ties. She appears to be reclining against a boulder, and two watermelons sit at her feet.  This is a particularly striking image, both in subject matter and execution.

José Encarnación Peña (1902-1979) Soqween - So Kwa A Weh (“Frost on the Mountain”) was one of the students of Dorothy Dunn at The Studio of the Santa Fe Indian School in the early 1930s.  He started painting well before then, though—as early as the 1920s—and continued until his death in 1979. His Tewa name was Soqween, though it appeared on his painting in various spellings. Soqween translates to “Frost on the Mountain.” Those who remember him in his later years recall that he was usually referred to as “Enky.”

Peña was painting at San Ildefonso Pueblo at the same time as Tonita Peña, Richard Martínez, Luís Gonzales, Abel Sánchez, and Romando Vigil.  In his early years, he was not as prolific as his peers. It was during the last ten years of his life that he became productive. He is represented in the collections of the Laboratory of Anthropology, Santa Fe; Museum of New Mexico; Denver Art Museum; and many others.

What is a Koosa or Koshari? a very important figure in Pueblo society seen as a black and white striped clown who demonstrates to the children "what NOT to do" oftentimes through their actions. Don't smoke, drink, say bad words, treat others badly, or be lazy. They are oftentimes seen as leaders in a dance procession. The stripes of the Koshari are usually horizontal and not vertical (if viewed by non-native peoples).

Condition: this San Ildefonso Pueblo Painting of Female Koosa Clown by Soqween is in excellent condition

Provenance: from the estate of the artist, passed to his widow and then to her grandson, the current owner.