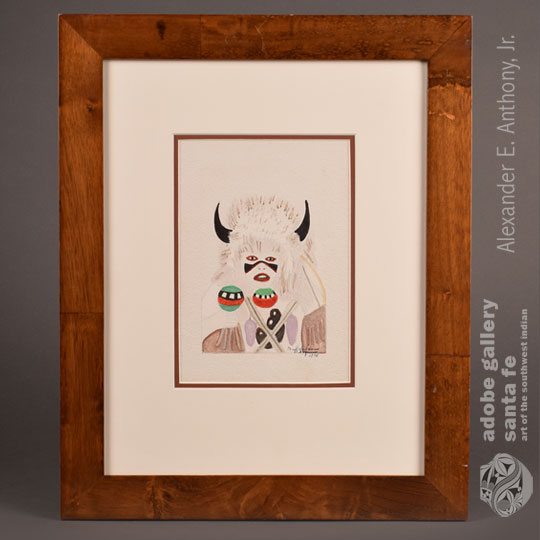 This Buffalo Dancer is the closest thing to a traditional portrait we’ve ever seen from San Ildefonso Pueblo artist José Encarnación Peña.  The artist’s bare-bones style, which varied greatly from that of his contemporaries, works very well with this particular offering. His colors are light and translucent, mostly, save for the strong red that circle the dancer’s eyes and mouth. White paint on white paper creates the majority of the figure, with thin gray and brown lines defining the details.  The composition ends abruptly in straight lines along the edges, forming right angles, as if the artist was recreating a photograph.

The painting is signed, dated, and titled “Buffalo Dancer, Soqween, 1975.”  It is framed under a wide off-white mat in a beautifully stained wood frame.

José Encarnación Peña (1902-1979) Soqween - So Kwa A Weh (Frost on the Mountain) was among the many painters at San Ildefonso Pueblo working in the 1920s: namely, Tonita Peña, Richard Martínez, Luís Gonzales, Abel Sánchez, and Romando Vigil.  “A little-known San Ildefonso artist is Encarnación Peña. One of the early artists, he produced little through the years. Like so many others, he was greatly influenced by the more outstanding men of his village, particularly in delicacy of style in painting dancers.” (Dunn, 1957)

Peña is well represented in the collections of the Denver Art Museum, Cleveland Museum of Art, Smithsonian Museum of the American Indian, Museum of Fine Arts Houston, Museum of Northern Arizona, Millicent Rogers Museum, Southwest Museum and the Museum of New Mexico’s Laboratory of Anthropology.  Among his notable awards was “Best example of original use of traditional material,” awarded by SWAIA in 1957.

Condition: this San Ildefonso Pueblo Painting of White Buffalo Dancer by Soqween is in excellent condition

Provenance: From the estate of the artist, passed to his widow and then to her grandson, the current owner.