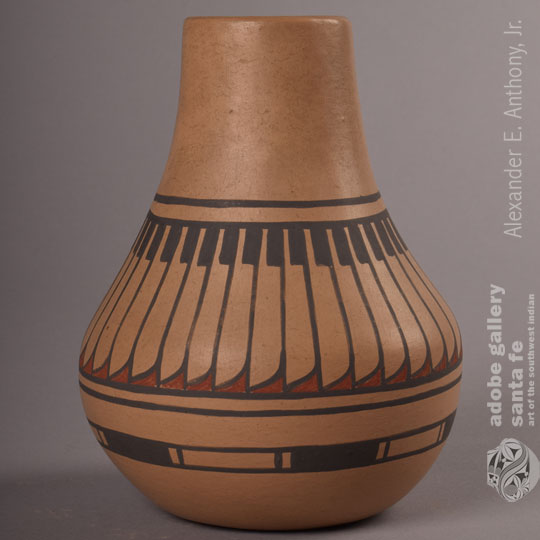 This tall-neck jar by Blue Corn of San Ildefonso Pueblo features a traditional feather pattern design, with feathers in a vertical position. At the upper neck, there is a black framing line and the tips of the feathers are black. At the other end, red pigment outlines the feather edges.  Another framing line separates the feather design from a band of horizontal rectangles that alternate in black and cream. The cream slip is the stone-polished slip that Blue Corn and her husband, Sandy, devised.  The jar is signed with the artist name and pueblo. Crucita Gonzales Calabaza (1921-1999) Blue Corn was born in San Ildefonso Pueblo and was encouraged by her grandmother, at an early age, to "forget school and become a potter."  Blue Corn obviously succeeded as illustrated by this exceptional jar.

Blue Corn and her husband, Sandy, spent two years in the 1960s experimenting with slips to revive the 19th-century Polychrome wares of San Ildefonso Pueblo. She stone-polished the base slip in the manner it was done before the introduction of the Cochiti slip in 1905, which required only rag polishing. In doing this, she achieved a highly-burnished finish. To this she applied the matte paint design at which she was so adept.

Provenance: from the collection of a client from Florida