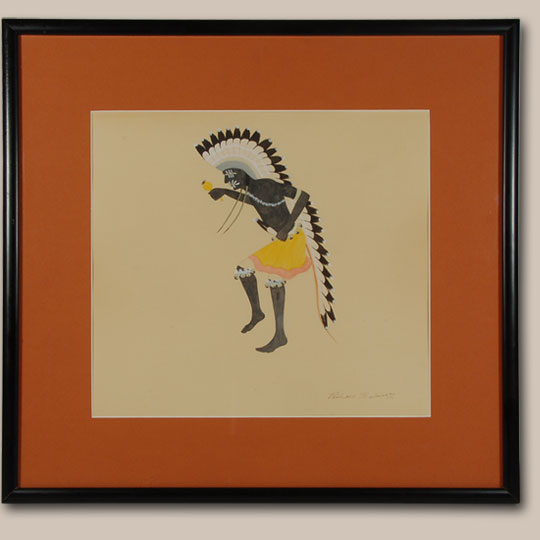 Richard Martinez (1904-1987)was not one of the San Ildefonso Pueblo youngsters who attended the San Ildefonso Day School during 1900-1907 when the teacher at that time, Esther Hoyt, provided her students with paper and paints and encouraged them to paint subjects with which they were familiar such as ceremonial dancers in the plaza.  Her classes were for students from age 5 to age 12.  Martinez had been born in 1904 so was too young to reap the benefits of the teacher’s generosity to her students even though it was against U. S. Government policy to encourage such acts.

Still, he is one of the earlier painters from San Ildefonso, painting as early as 1920.  He was well established as an artist before The Studio at the Santa Fe Indian School was begun in 1932 under the tutelage of Dorothy Dunn.  He was one of the original students at Santa Fe Indian School and was commissioned to paint a mural in the student dining room in 1936.  The mural was destroyed a few years ago when the All Pueblo Council demolished all the old buildings at the Indian School.  None of the murals in any of the buildings were saved.

Dog Dancers appear in many tribes. Karl Bodmer (1809-1893) was hired as an illustrator by Prince Maximilian to paint images encountered on its expedition. Bodmer painted an exquisite detailed image of a Hidatsa Indian Dog Dance in the 1830s. A dog dancer was one of the bravest warriors of the tribe and would fight to the death to protect his people. The Dog Dance imitated battle maneuvers and was performed to bring success in battles.

It is not known if the Dog Dance at San Ildefonso represents a warrior of the tribe or not, but it is likely similar if not the same. In this painting, the Dog dancer's striking headdress is made of eagle or wild turkey feathers. His body is painted black and he has a shell bandolier across his chest and bells wrapped around his knees. The shells and bells would make an ominous sound during an active dance. His braids are wrapped in fabric in the manner often seen at Taos Pueblo. He holds a dance rattle in one hand and, in his other hand he holds an eagle feather.

Provenance: from the collection of a person from California who inherited her mom’s extensive Native American art collection 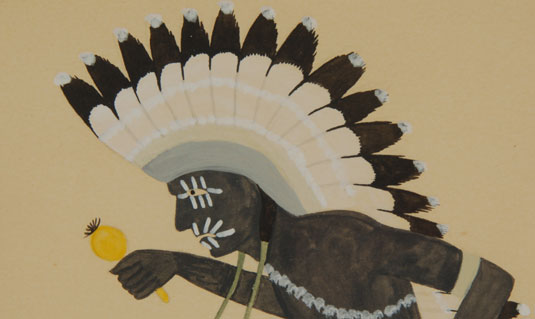