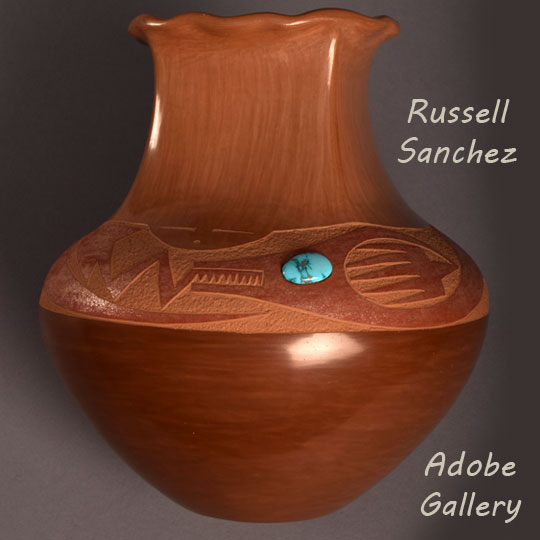 In this jar, dated 1989 by Russell Sanchez of San Ildefonso Pueblo, we see a variety of colors, textures, and surface dimensions.  The top section is polished beige, below which is the design band, followed by a polished red lower body.  Another accomplished pueblo potter was admiring the jar at the gallery. She noted that the jar was most likely “water polished”—slipped in water instead of clay, and then stone-polished. The rim rolls out to a fluted surface.

The Avanyu design appears above a pecked sandy background.  The Avanyu itself was slipped in red clay and over-slipped in micaceous clay, resulting in a muted finish.  A large beautiful blue turquoise gemstone serves as the eye of the Avanyu.  Just above the Avanyu’s mouth is a simple face, as in the face of the sun.  Above the undulating body are clouds in groups of three.  The neck of the vessel is squared off from the roundness of the body.

Russel Sanchez (b. 1966) has been at the forefront of contemporary pottery for over 30 years.  Russell could be referred to as a "modernist" potter. His work shows influence from Tony Da and Popovi Da. It is not unusual for him to incorporate different colors of clay into his work, often combining two or more colors in the same vessel, as in this one. His use of turquoise stones into some pieces, and heishe into others, is frequent. He often adds a lid to a vessel. At times he adds micaceous slip to a piece of pottery. He is an innovator in the use of clay, slip, color, and vessel shape.

Russell is the grandson of Oqwa Pi (Abel Sanchez), a famous early San Ildefonso painter. Russell's grandmother and Rose Gonzales were sisters.  He has been the winner of the New Mexico Governor’s Award for Excellence, a prestigious annual celebration of New Mexico’s diverse artist community.  This art award, presented annually since 1974, serves as lifetime achievement laurels for artists whose work has become part of the state’s aesthetic tapestry, as well as for scholars and benefactors who have helped sustain New Mexico’s vibrant cultural atmosphere.

Provenance: this San Ildefonso Vintage Pottery Jar with Turquoise by Russell Sanchez is from a gentleman from Santa Fe