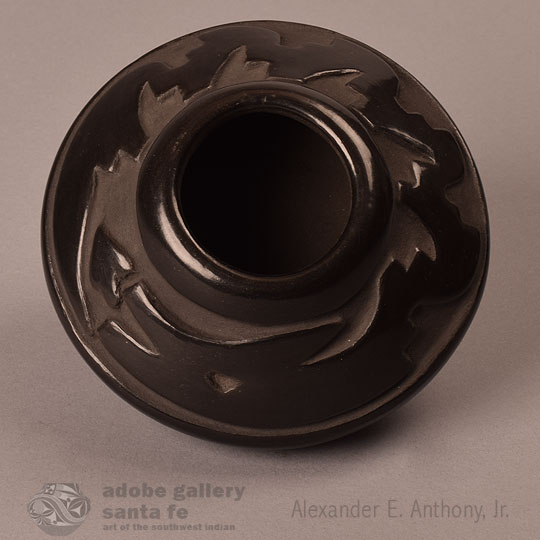 This black jar is an excellent example of early Santa Clara Pueblo pottery by Grace Medicine Flower.  Medicine Flower has been making sgraffito-style pottery so long now that it is not an easy task to find earlier pottery of the more traditional style.

Grace Medicine Flower is best known today for her beautifully carved pottery bowls and jars with extensive sgraffito designs, but, as all potters did, she had her beginning with small traditional black pottery with designs such as the Avanyu.  As with all truly talented artists, innovation soon overtook the traditional and Medicine Flower created her masterpieces.

Medicine Flower is a member of the renowned Tafoya family of Santa Clara Pueblo.  Her grandmother was Sara Fina Tafoya. Her parents were Camilio Sunflower Tafoya and Agapita Yellow Flower Tafoya.  Her brother was the equally famous Joseph Lonewolf.

Camilio, Joseph and Grace worked together in the early years of their profession.  It was not until the late 1960s that they began the sgraffito-style of design. This black jar with an Avanyu design was most likely made in the late 1950s or early 1960s before Medicine Flower expanded her style to include sgraffito design.  It is signed Grace Medicine Flower Santa Clara.