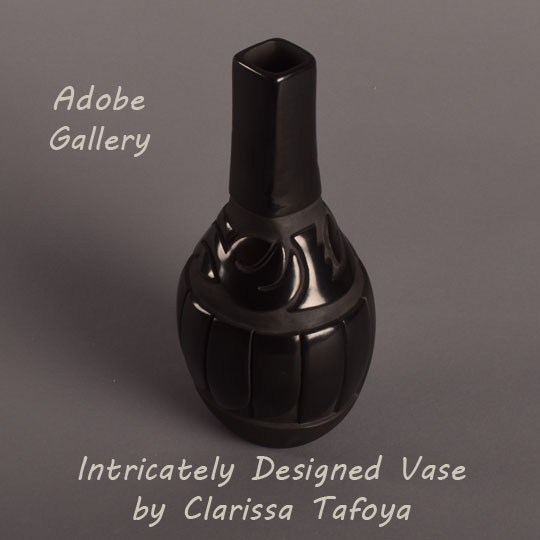 This thin pottery vase, made by Santa Clara Pueblo artist Clarissa Tafoya, is a wonderfully unique piece of carved blackware.  Its base is a bulbous form. From this, a tall, thin neck emerges, shifting from the circular shape of the base to a perfect square.  At the rim, the square’s corners are rounded gently.

Its designs are similarly unique.  A wide design band covers the bottom half of the vessel.  Polished black feathers occupy about two thirds of this band, dividing it both horizontally and vertically.  The remaining areas of this band are finished in matte black.  In the area where the feathers disappear altogether, the matte black rises to the top of the design band.  Within this area, carved kiva steps rise from a thin rectangular hole, which goes all the way through that side of the vase.  Above this, a polished black design flows around the shoulder.  The thin, squared neck is all black, polished to perfection. The bottom of the vase is signed “Clarissa Tafoya, Santa Clara Pueblo.”

Clarissa Tafoya is a Santa Clara Pueblo potter.  Her mother and grandmother, Rose Tafoya and Lucaria Tafoya, taught her the art of making pottery.  In 2001, Tafoya married Timothy Roller, a Santa Clara potter who is the grandson of Margaret Tafoya and son of Toni Roller.  She is known for carved redware and blackware in unique shapes.