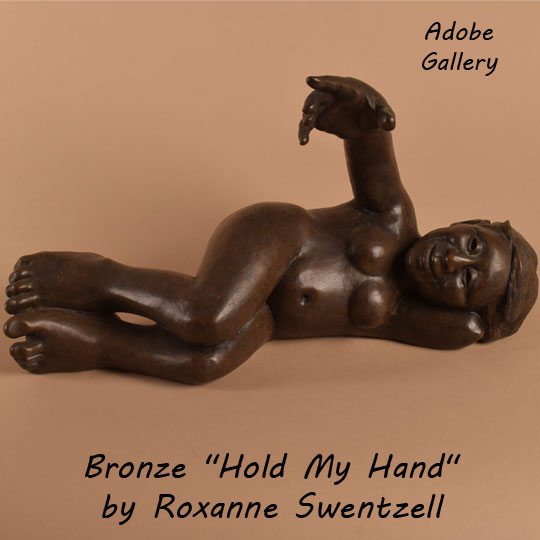 This bronze sculpture by Santa Clara Pueblo artist Roxanne Swentzell titled “Hold My Hand” was cast in an edition 20 and this is number 20.   It was originally produced in June or July of 2001 by Roxanne’s sister Poem through Bright Foundry, Inc., Louisville, Kentucky.

The reclining figure appears to be a young woman in a playful mood. She is without clothing as if she just emerged from a bath. She flashes a charming smile. Who could refuse her request? The bronze surface is covered in a texture of circles in a lighter color that breaks the monotony of flat solid bronze color. The circles reflect light and add an interesting patina.

With a family full of potters and sculptors, it was a natural progression for Santa Clara Pueblo Roxanne Swentzell to become an artist. While still in high school, this Native American contemporary legend had the opportunity to study at the Institute of American Indian Arts in Santa Fe. She later found her way to the Portland Museum Art School in Oregon.

Roxanne (1962 - ) began making clay figures at age 7, and as an adult, she started to make full-length clay figures depicting “the complete spectrum of the human spirit,” as her website says. In her estimation, a great deal of humanity is “out of touch with their environment,” and her figures are meant to guide them back to their surroundings and feelings, including a “full range of emotions and irrepressible moods.”  Swentzell spends a lot of time creating female characters in hopes that it will help strike a balance between the power of men and women. Humor is also an integral part of her work.

The Poeh Cultural Center’s Tower Gallery in Pojoaque, just north of Santa Fe, is devoted to her pieces, and Roxanne’s sculptures can be found in collections such as the National Museum of the American Indian (NMAI) of the Smithsonian Institution in Washington, D.C.

Provenance: this Santa Clara Pueblo Bronze Sculpture "Hold My Hand" by Roxanne Swentzell is from a client from Omaha, Nebraska.