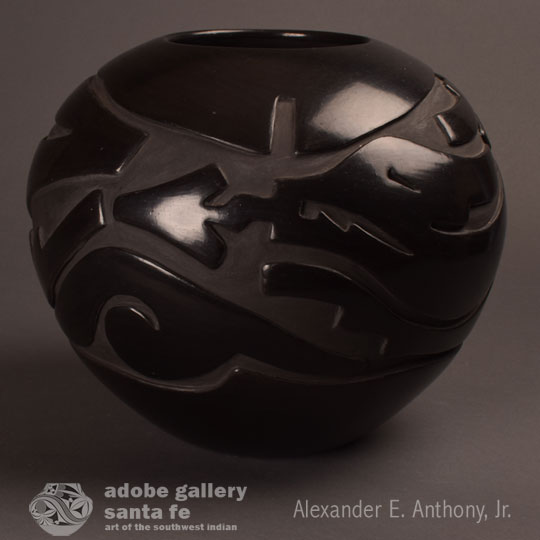 Christina Naranjo of Santa Clara Pueblo was an outstanding potter who created carved blackware pieces like this beautiful round jar.  The shape of this vessel—nearly spherical, save for the open rim and a slight shift towards a more traditional shape at the very bottom—is incredibly appealing.   The carved designs are very creative, too. They’re contained within two banding lines, which wind around the jar near its rim and its bottom. From these two banding lines, a number of other lines emerge, ultimately creating an Avanyu design.  Naranjo was known for making excellent Avanyu designs, this one is particularly dramatic and animated. It is not carved into the pot, it is defined by the carve lines around it. This jar is exceptional in both shape and design.

Many potters shy away from larger pieces. Not only are they difficult to form, the stone polishing of the slip must not be interrupted until the entire vessel is completed—a task that may include several members of a family taking turns. Additionally, large vessels are more apt to contain air bubbles in the clay, resulting in an explosion during firing.  The burnishing of the slip on this jar was so well accomplished that there are no visible polishing marks from the motion of the stone. The only problem is that the fire must have been hotter on one side, as there are very small blisters on one side where it is evident that the jar was overheated. The area is confined to one part of the vessel and is not viewable when looking at the jar from the side where the head of the Avanyu is seen.

Christina Naranjo (1892-1980) was the daughter of Sara Fina & Geronimo Tafoya, and the sister to Margaret and Camilio Tafoya.  She was the mother of Teresita Naranjo and Mary Cain, and the great-grandmother of Tammy Garcia and Autumn Borts-Medlock. Like her family members, Naranjo used traditional methods and native clay to create polished blackware.  Her works are included in museum collections around the country.

The bottom of the jar is signed “Christina Naranjo, Santa Clara Pueblo.”

Condition: good, no cracks of abrasions, the only issues are the aforementioned blisters

Provenance: this Santa Clara Pueblo Carved Round Black Pottery Jar with Avanyu by Christina Naranjo is from the collection of a New Jersey resident who is downsizing