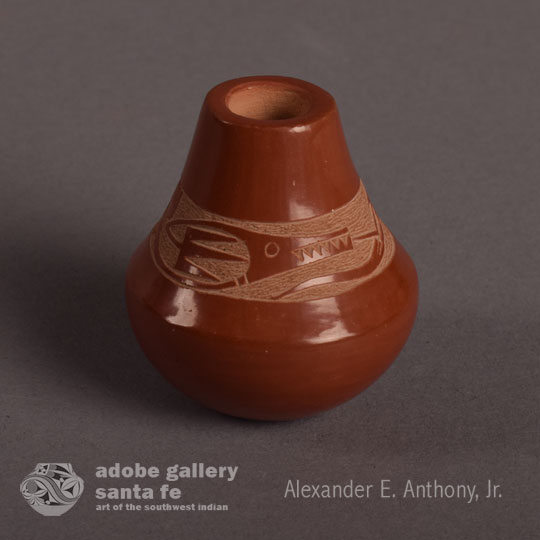 This Santa Clara Pueblo tall neck pottery jar is a very traditional Tewa vessel shape as seen in early pottery of the Northern New Mexico pueblos.  This one by Art Cody Haungooah, however, is miniature in scale and modern in appearance. It was slipped in red clay and stone polished to a high sheen.  An Avanyu was carved at the lower portion of the neck. The artist signed and dated the jar 1979. Art Cody Haungooah was the grandson of famous Kiowa ledger artist Silver Horn, who was known as Haungooah.  Following in his grandfather’s footsteps, the younger Haungooah became an innovative artist. In the late 1960s, Cody was among the first artists to use the sgraffito technique on pueblo pottery. He married a talented Santa Clara Pueblo potter, Martha Suazo, who encouraged him to decorate her pieces. Together they won numerous prizes during the 1970s. They signed their work “Haungooah” in honor of Cody’s grandfather. When Martha passed away sometime after 1979, he continued to create and decorate his own work, until his untimely death only a few years later in 1985.

Provenance: from the extensive collection of a family from Santa Fe