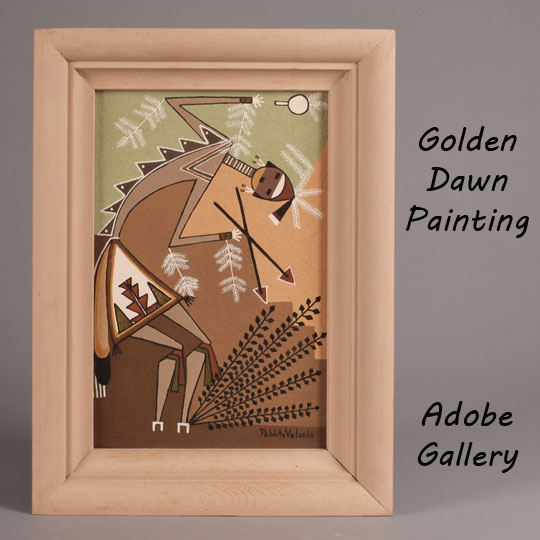 Santa Clara Pueblo artist Pablita Velarde did amazing things with mineral earth paints of her own making, and this painting of a Yei figure is a fine example of her work.  Velarde (1918-2006) worked with water-based paints from time to time, but she is best known and internationally recognized for her paintings rendered in her handmade mineral paints.  Velarde’s paint creation was a very laborious process.  After gathering the materials from many areas of the Southwest, she ground each mineral to a powdery substance on a metate with a mano.  She then stored the various minerals in jars until ready to convert them to paint, which she achieved by combining them with other substances. Velarde insisted on following this process because that is the way her ancestors made paints for painting on canyon walls, and she wanted to continue that process.  She is to be commended for continuing such a process.

With this piece, she moved away from her frequently depicted Pueblo dance subjects and created a Yei figure. The Yei figure is tall—too tall for the painting, actually, so he bends at the waist to fit within the frame.  Its positioning is clever, and the result is a strong composition.  The figure wears a dance kilt and jewelry, and holds a rattle and a pair of arrows.  A plant emerges from its feet, rising diagonally and eventually meeting the arrowheads.  Earthy tones cover the background, and a soft green sky rises from behind the figure.  The painting’s condition is notable, too.  It is in original condition, with strong, bright pigments that look as if they were just applied.  This is a delightful painting from one of the most significant Pueblo painters.

The painting is signed Pablita Velarde in lower right.  It is framed in a simple wood frame.

Santa Clara Pueblo artist Pablita Velarde (1918-2006) Tse Tsan - Golden Dawn was born in 1918 at Santa Clara Pueblo. She was one of the first full-time female students in Dorothy Dunn's art class (“The Studio”) at the Santa Fe Indian School. Velarde was active until her death, and is now regarded as one of the most significant figures in the history of Pueblo painting.  Her daughter, granddaughter, and great-granddaughter would go on to become painters, too.  Velarde passed away in 2006, leaving behind a lasting legacy and a similarly talented and successful family of artists.