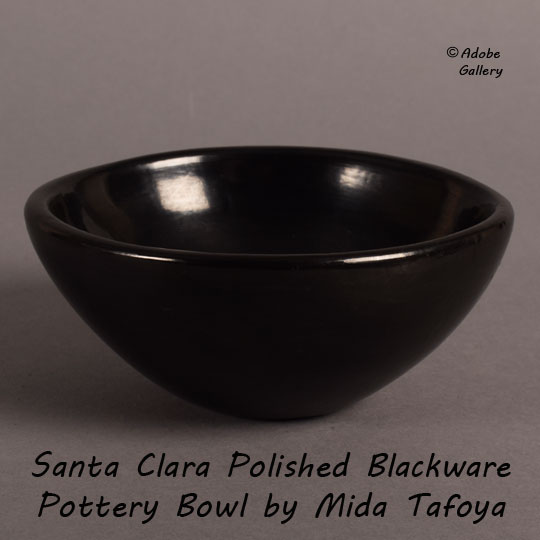 This polished blackware pottery bowl was created by Mida Tafoya of Santa Clara Pueblo. Those who admire blackware will find much to appreciate about this piece. Its form is similar to that of a functional pueblo chile bowl, but it was obviously made for sale and display rather than use.

Mida's work with this piece is excellent. The bowl is smooth and well balanced, with walls that are consistent in thickness throughout. The polished surface is beautiful, particularly in the interior, where the curved walls capture and reflect light in interesting ways. We have only handled a few of Mida's pieces in the past. After spending time with this bowl, we hope to see more of her work. The bottom of the bowl is signed Mida Tafoya.

Mida Tafoya (1931 - ) is a member of the famous Tafoya family of Santa Clara Pueblo. Her mother was Christina Naranjo, and her grandmother was Sara Fina Tafoya. She is the niece of Margaret Tafoya. Mida began making pottery in 1945 and, like many pueblo potters, was taught by her family.