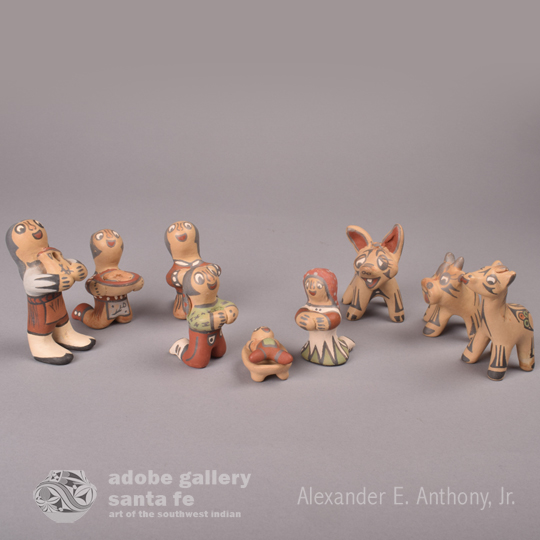 Whimsical, charming and delightful are just a few adjectives that could be used to describe this Santa Clara Pueblo Polychrome Ten Piece Pottery Nacimiento by Margaret and Luther Gutierrez.  This set is comprised of the Holy Family, three wise men and three animals. Each wise man carries an offering of something characteristic to the Pueblo people.  Three animals—cow, donkey and giraffe—complete the set. Baby Jesús and his cradle are separate pieces.

The first known pueblo pottery nacimiento is credited to Manuel Vigil of Tesuque Pueblo and believed to have been made in the late 1950s.  Margaret and Luther Gutierrez made their first set in 1978.

Margaret and Luther Gutierrez were the children of Lela and Van Gutierrez, who continued the distinctive family style of making pottery using a variety of colors including red, tan, gold, blue, black, white and green pigments, all obtained from natural sources.  It is only natural that they would have created a nacimiento because the family has long been known for the creation of figurines.

Condition: very good condition with some minor paint touch up

Provenance: this Santa Clara Pueblo Polychrome Ten Piece Pottery Nacimiento by Margaret and Luther Gutierrez is from the collection of a resident of Santa Fe