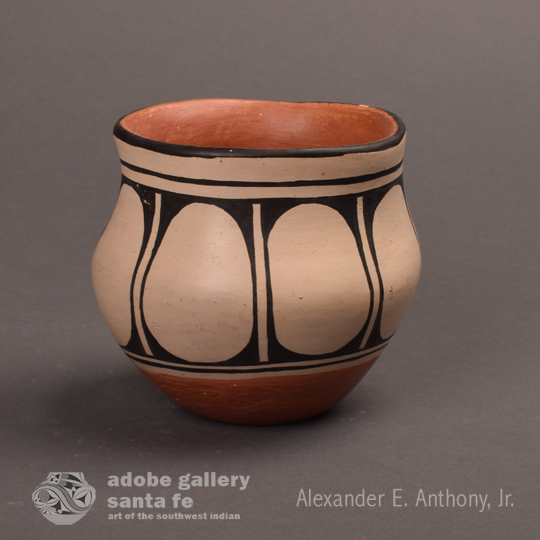 Santana Melchor was considered one of the finest potters at Kewa Pueblo in the early- and mid-20th century. She made exceptional large storage jars. Throughout her career, she used traditional designs and is responsible for keeping that tradition alive. She was part of the delegation of pueblo potters who visited the White House in 1974 as a guest of first lady Pat Nixon.

During the period 1920 to 1940, many potters at Santo Domingo were making small, poorly made tourist wares to be sold by the roadside, but later in the period, there was an improvement in the quality of the tourist wares. Santana Melchor was certainly an innovator who was producing the finer tourist wares.

It was also at this time that designs began to include birds, plant forms, and animals, with accents in red, much more than ever before. The potential for sales seemed to be greater when these design elements were used.  Melchor, however, continued with traditional designs such as those on this jar.

Following these two decades, pottery production was greatly reduced at the pueblo because many artisans were making fine jewelry, which was much more remunerative than pottery. Only a few potters continued the craft. Melchor was one of the finest to do so. Her jars were beautifully formed with a bulge at the mid-section, incurving upper body and rolled out rim. She decorated her pieces in a technically proficient manner. It is no wonder that she was one of the chosen few selected to visit the White House in 1974.

This jar was decorated with a design that produced large ovoid creamy white elements, achieved by painting an outline in black that enclosed the creamy white.  The rim is black. There is a single framing line at the neck and another one below the painted panel. The entire design, including the rim, is separated by a ceremonial line separation.

Provenance: from the collection of John W. Barry, author of American Indian Pottery.  This small jar is illustrated on p.114 of that 1984 publication.