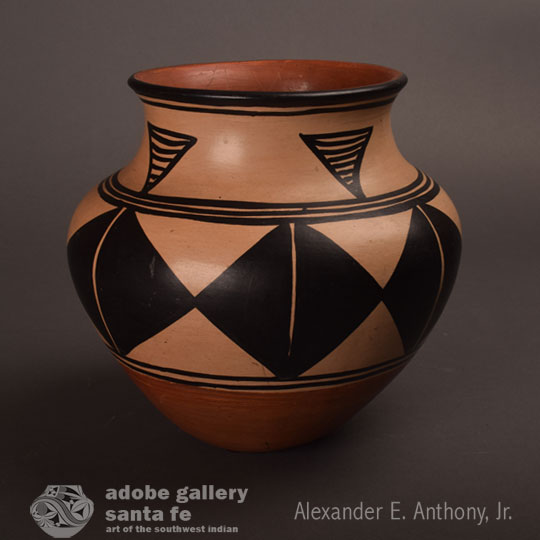 Pueblo pottery water jars almost always feature symbols associated with rain.  They may not always be obvious to outsiders, but they probably do exist.  The neck design on this Aguilar jar—an inverse triangle with parallel black lines—may appear to just be a decorative design; however, it possibly represents a violent tornado-like storm with abundant rain. The black triangles on the body—meeting at their peaks, positioned back-to-back with neighboring black triangles—could possibly represent the darkness of a day of such torrential rain.  All of this is speculative, however, because we do not know the intent of the artist.

Following tradition, the potter painted the rim black, the interior neck red, and the underbody red.  A single framing line lies below the rim, double framing lines lie below the design panel and triple framing lines define the shoulder.  Triple framing lines are not often seen on Santo Domingo pottery—they provide a clue that a piece might have been created by the Aguilars. A ceremonial line break cuts through every set of lines, including the black rim.

Robert Tenorio, on a visit to the gallery, told me that the jars we attribute to the Aguilar sisters should be referred to as having been made by the Caté sisters.  Traditionally, pottery at the time was not sold to the public by the women but was taken out and sold by a male member of the family.  He said that the jars of the Caté sisters were taken out and sold by a male Aguilar member, and therefore have always been associated with the Aguilar name, when, properly, they should be credited to the potters by their Caté name.  We realize that, after a hundred years, it is not likely that the attribution will ever be changed from Aguilar to Caté, but we feel it to be important to express publicly the strong feelings of Robert Tenorio in regard to these jars. Memo:  We have a limited number of exhibit catalogs from our 2003 and the 2019 Aguilar sisters shows at the gallery.  We will be happy to mail a copy at no cost if you wish to have one for your reference library.