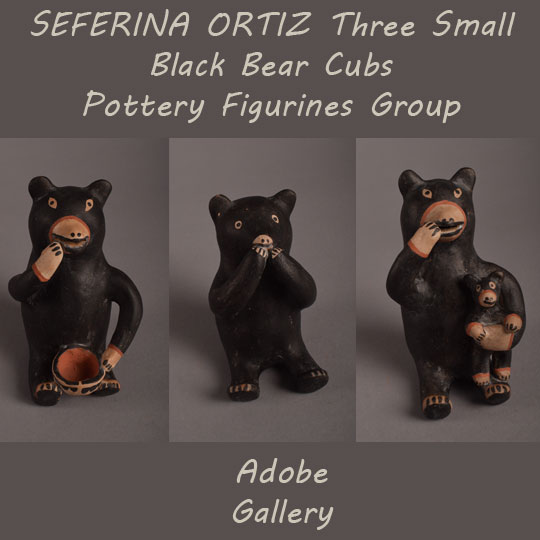 These three black bear figurines may have been made by Cochiti Pueblo artist Seferina Ortiz as a family—papa bear with a honey bowl, mama bear with a cub, and young bear cub with his paws at his mouth.  It is logical that they were made as a group and not intended to be sold individually.  They are really charming as a family.

Seferina Ortiz (1931-2007) was making pottery figurines as early as the 1950s.  When I met her in the late 1970s, she was well established as an artist and was busily making storyteller figurines, drummers, animals, mermaids, and other figurative pottery.

Cochiti Pueblo has a long history of producing figurative pottery. It reached its prime in the last quarter of the 19th century and the first quarter of the 20th century. There was a strong revival in the early 1970s with the production of storyteller figurines. Some potters at Cochiti expanded beyond the traditional storyteller figurines. Seferina Ortiz was one of them.

It is unfortunate that Seferina is no longer with us, but her legacy will continue through her pottery creations and through her talented children.  Each of the three bears is signed with the name and pueblo of the potter.  They are in original condition.