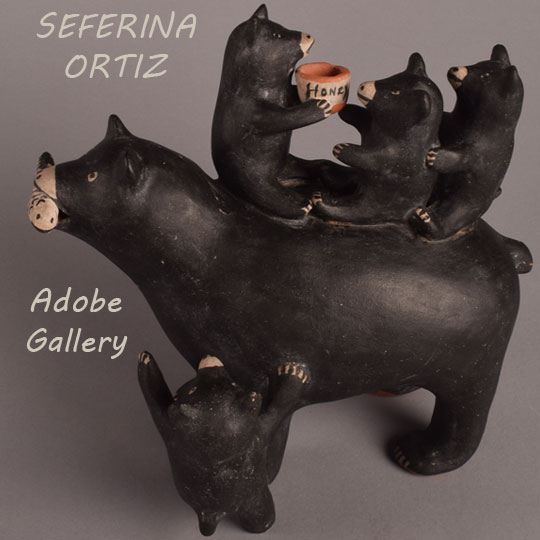 This mother black bear has successfully caught a fish but her four cubs do not seem to share her interest in it.  The three cubs on her back seem to be sharing a bucket of honey.  The fourth cub is attempting to climb up the mother’s side, perhaps to share in the fish or the honey.

The pueblo people share a relationship with animals that the white culture fails to appreciate.  The beliefs of the pueblo are that everything has a life—rocks, plants, animals, birds, snakes and all other things that exist.  Animals are treated with respect and are only killed when food is needed.  Even then, they offer a prayer to the animal thanking it for giving its life for their needs.  They never kill animals unnecessarily, as in sport.

Pottery figurines of animals are, of course, made to sell to tourists and collectors as this Seferina Ortiz Pottery Black Bear Storyteller Figurine with Four Cubs. But Pueblo potters also developed the animal figurines as a tool to teach their own children how to respect and honor animals.

This pottery figurine by Seferina Ortiz was not purchased from Adobe Gallery but all of the Cochiti Pueblo pottery figurines purchased by this collector were in the 1980s and 90s,so it is safe to assume that this was made during that time.  It is signed and is in original condition.