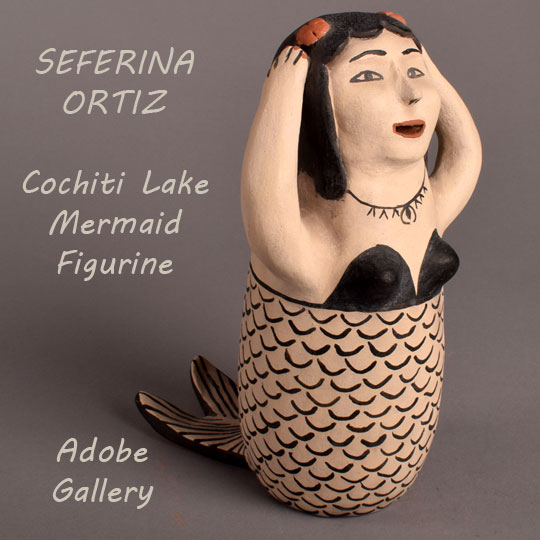 One can speculate why potters at Cochiti Pueblo made figurines to an extent that it dominated the pottery production from 1880 to the present.  It is said that the nineteenth-century pottery figurines were inspired by the arrival of the white culture in larger numbers—preachers, merchants, circus performers, opera singers, and others.  Later, we see an increase in the quantity and variety of animal figurines.  Supposedly, these were deemed good teaching items for the Cochiti children to get a good understanding of the relationship between animals and humans as a way to teach the children respect for animals.

What was the spark that ignited the introduction of tourist figurines, mermaids and other new innovations?  It was most likely the building of a dam in the 1970s that created Cochiti Lake.  With the lake, came the tourists—swimmers, shorts, sunglasses, cameras, and all the accoutrements that white tourists bring to a lake.  Some potters made large standing male and female figurines of white people in bikinis, trunks, sunglasses, cameras and other props.  Seferina made a Cochiti Lake mermaid.

Adobe Gallery does not know if Seferina Ortiz was the first potter to make a mermaid figurine, as others are known to have done so too, but this one was made in 1991 at which time we purchased it from Seferina and sold it to a client from whom we now have it back.

The Seferina Ortiz Pottery Cochiti Lake Mermaid Figurine has a beautiful face with high cheeks, a delicate nose, open mouth with beautiful lips, and open eyes.  Her eyebrows and hair are dark black and she has two flowers in her hair.  Her body is filled with scales and her tail extends out behind her.  She is in original condition and is signed with the name of the potter.