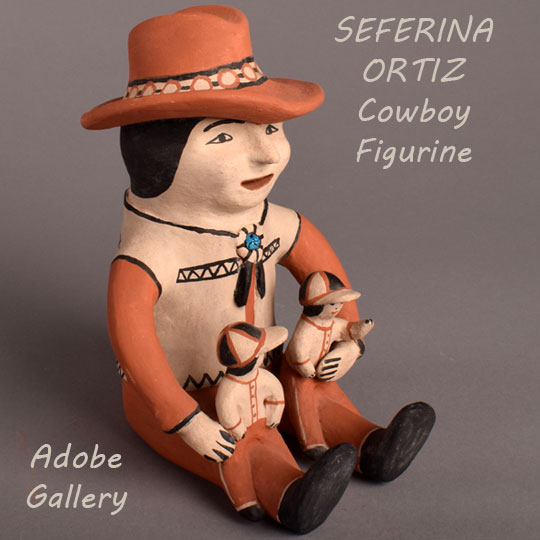 Cochiti Pueblo artist Seferina Ortiz strayed from her traditional male pottery storyteller figurine when she created this cowboy storyteller with two boys wearing baseball caps.  The cowboy is all dressed out with a vest and a bolo with a real turquoise cab inserted.  He is wearing a hat with a painted hatband.

As mentioned, each of the boys is wearing a baseball cap and each has claimed a leg to sit on.  One would assume the family is attending a sports event.

Since Seferina passed away in 2007, it has been difficult for us to acquire pottery figurines made by her because most collectors who have them are keeping them since they cannot be replaced. It is a pleasure for us to be able to post this one to our site at this time.  This figurine and a half dozen more by Seferina all came to us from a single collection.

This cowboy is signed with the name and pueblo of the potter.  It is in original condition.  This pottery figurine is especially nice.