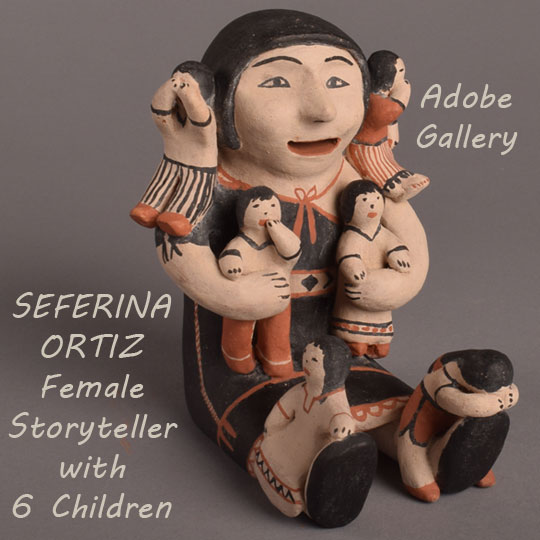 Artist Seferina Ortiz’s pottery storyteller has a happy face with open eyes, arched eyebrows and an open mouth. She is dressed in a traditional Cochiti Pueblo manta that is over one shoulder and off the other.  A shawl hangs down her back.  The children are sitting on her shoulder, held in her arms, and sitting on her legs.  One has his eyes covered with his hands, two have a hand over their mouth, one girl is looking off into the distance and one boy is resting his head on the adult’s foot.

Seferina (1931-2007) is considered one of the matriarchs of the potter population of Cochiti Pueblo.  Not only did she leave a legacy of her pottery, she left a legacy in her children—Joyce, Janice, Inez, Virgil, Leon and Angie, some of whom are considered top potters today.

This Seferina Ortiz Pottery Female Storyteller With 6 Children is signed on the underside Seferina Ortiz, Cochiti, N.M. It dates to the early 1990s. It is in original condition.