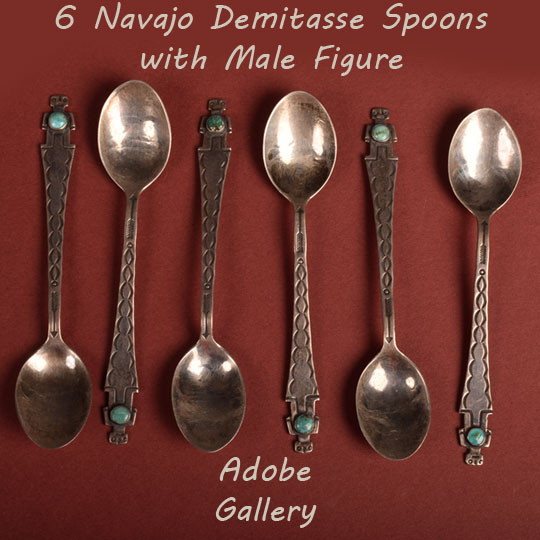 When the transcontinental railroad came to the Southwest in the 1880s, it opened a brand-new market for Navajo and Pueblo silversmiths. Knowing that travelers were eager to purchase souvenirs, they began to create innovative and unique items to sell. One of the most successful items was the souvenir spoon.

“Navajo silverwork came of age at the moment when railroad travel to the Southwest brought artisans and traders into the American marketplace. The Victorian love of cutlery, and the nation’s obsession with commemorative silver merged in the intriguing artistry of Navajo spoons. From the 1880s to World War II, Navajo smiths brought the highest level of skill and invention to functional teaspoons, servers, and sugar shells. At the same time, the spoons were the canvas for ethnic art. An utterly unique artform, these artifacts are now ardently sought by collectors and institutions, as rare mementos of Navajo artistry and the souvenir trade.” Kline 2001

This Set of Six Matching Demitasse Spoons with Male Figure is an example of some of the finest work made for the tourist trade during this period.  Each of the identical spoons is stamped with an arrow and a series of symmetrically placed crescent shapes which were known as “sun rays.”  At the top of each spoon is the “male” figure with a beautiful turquoise cabochon on his chest. That figure represented human life.

Provenance:  this Set of Six Matching Navajo Demitasse Silver and Turquoise Spoons with Male Figure is from an estate in Oklahoma