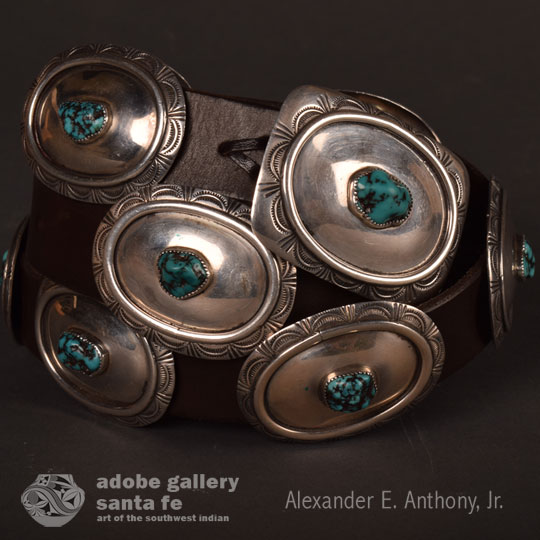 The expert craftsmanship of Frank Patania is apparent in this beautiful mid-century Silver and Turquoise concho belt. The belt consists of a single cabochon of dark matrix turquoise set in a rectangular-shaped buckle and in each of the ten conchas.  Each turquoise cabochon is enclosed in a hand-made sawtooth bezel that rests in a frame of smooth, highly polished silver. A section of delicate stampwork surrounds the polished silver. The finely rendered stampwork is a reflection of Patania’s admiration for the Native American artists he worked with during his career. Frank Patania’s designs had a more European appearance, incorporating  Art Deco and Art Nouveau motifs with classic, perfectly proportioned lines with a look that was both modern and distinctly southwestern.

As a young man, Frank Patania trained as a goldsmith in Sicily. After his family moved to New York, he continued working as a jewelry maker. Like many Easterners at the beginning of the century, Patania moved west to recover from tuberculosis. He fell in love with the New Mexican landscape and settled in Santa Fe where, in 1927, he opened the Thunderbird Shop. Looking for a warmer winter home, he opened an additional shop in Tucson in the 1930s. He hired jewelers to work in his studios, many of whom went on to become well known in their own right, such as Julian Lovato of Kewa Pueblo (formerly known as Santo Domingo Pueblo).

This belt is stamped with Patania’s hallmark signature— the conjoined FP STERLING and his Thunderbird Shop's thunderbird logo, which are located on the bar of the buckle.

Condition: The Silver and Turquoise Concha Belt by Frank Patania is in excellent condition. The conchas have been recently set on new leather.

Provenance: From a collection in Colorado