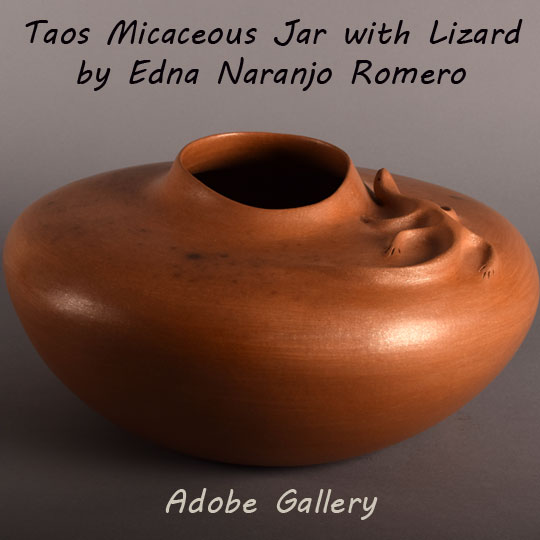 This very large seed jar was constructed from Taos Pueblo micaceous clay.  The potter created a slanting rim reminiscent of a volcano opening.  On the large flat shoulder is a lizard with its head raised.  There are no other designs on the jar except for a few small fire clouds, adhering to Taos Pueblo traditions.

Edna Naranjo Romero (1936- ) is from a Santa Clara Pueblo family of fame.  She is the daughter of Rose Naranjo and a sister of Jody Folwell, Rina Swentzell, and Nora Naranjo Morse.  She has been a consistent award winner at Santa Fe Indian Market from as early as 1986.

Provenance: this Taos Micaceous Jar with Lizard by Edna Naranjo Romero is from the estate of Henry Christensen III, attorney at law in New York, who purchased the bowl from the artist at Santa Fe Indian Market in 2016 Wah-to-yah and the Taos Trail [SOLD]
by