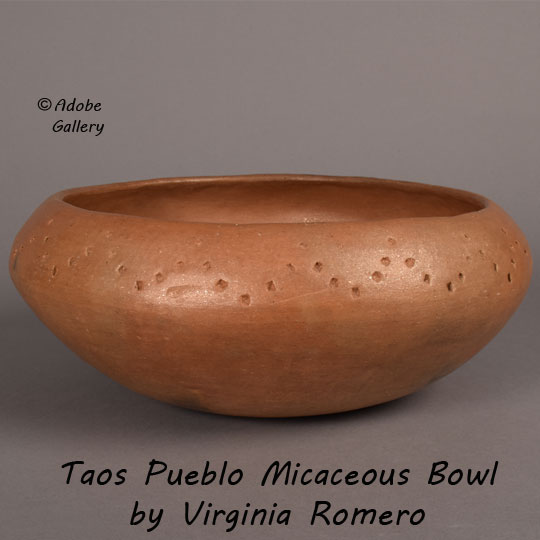 This micaceous clay bowl was made by Virginia T. Romero of Taos Pueblo. Romero's Tewa name is Pop Tő, which translates to "Flower House." This bowl is the first of Romero's works to make its way to us, and we are pleased to spend some time with it. It's a low, wide bowl made of micaceous clay. With a sharp curve at the midpoint and a rim that curls inward, this bowl has a strong form.

The decorative elements on this bowl are subtle and appealing. The micaceous clay's natural sparkle gives the piece a consistent glow, which is enhanced by the appearance of contrasting tones in the form of a pattern of dark fire clouds. Romero carved or impressed a series of small holes into a zigzagging line, which circles the bowl just below the rim. All of these designs are subtle, likely because they were created not by adding additional materials but by modifying the clay itself.

The bottom of the bowl is signed Virginia T. Romero, Taos.

Virginia T. Romero (1898-1998) Pop Tő (Flower House) was a Taos Pueblo potter. Romero was a student at the Santa Fe Indian School during the early 1900s. In 1919, she began making pottery. Remarkably, she continued doing so until she passed away in 1998 at 100 years old. She is recognized for her efforts to keep the Taos Pueblo micaceous pottery tradition alive. Her works are included in a number of prominent museum collections. Romero has been honored by the Millicent Rogers Museum and the State of New Mexico for her cultural contributions.

Provenance: this Taos Pueblo Micaceous Bowl by Virginia Romero is from a private collection