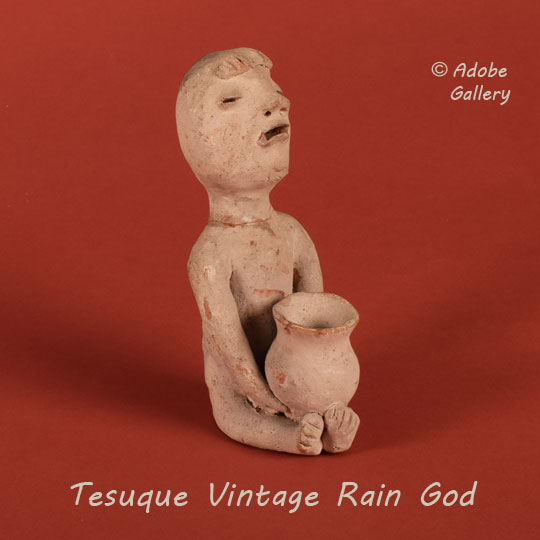 This Tesuque Pueblo Rain God Figurine was sculpted in a more unusual manner than most. He has sculpted hair or prominent brow, individual toes, his right foot is turned outward, and his hands are lower on the pot than most. His head has been broken off at the neck and glued back on. This is typically seen with rain gods of this vintage.

In the late 1800s, Nature had its influence on the pueblo when severe droughts made it more difficult to produce crops for their own use. Villagers began drifting into Santa Fe to trade pottery or other personal possessions for food. Their increased encounter with traders in Santa Fe could have been responsible for the emergence of the rain god figurines. Merchants were looking for tourist items to sell that were small, inexpensive, and appeared to be of a religious nature.

The rain god figurines had no religious significance, no historic connection to Tesuque, and probably were the invention of a trader. A rain god certainly sounded like something created to bring rain, thus it had significance to the tourists. The earliest documented rain god figurine is 1879, a year before the train arrived in New Mexico, but traders were already established and selling Indian goods in Santa Fe.

Some of the important curio dealers in and around Santa Fe in the late 1800s and early 1900s were Jake Gold, Abe Gold, J. S. Candelario, and Francis E. Lester. Research by Kathleen Howard and Diana Pardue in preparation for publishing Inventing the Southwest, revealed an order from Candelario's shop ". . .a baggage car with about 200 assorted small pieces of pottery, which we can sell at retail from 15 cents to 25 cents'' (September 1904) and "one hundred Tesuque pottery gods, small size, and fifty of the larger size black gods" (April 1905). The following year, the Fred Harvey Company ordered "100 small rain gods, three dozen larger ones." Anderson p.70

Condition: good condition with the exception of the head broken off and glued on. Also, there is a metal hole in the bottom where there may have been a stand with a metal rod for stability at one time for this figurine.

Provenance: this Tesuque Pueblo Late Nineteenth Century Rain God with Prominent Brow is from a from a family in California to whom we sold this in 2006.