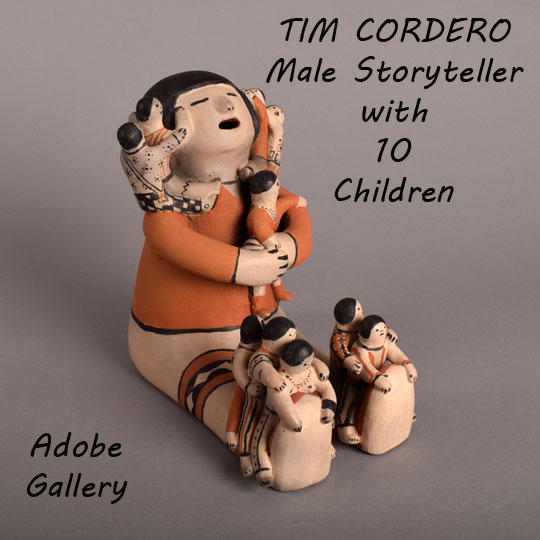 This pottery storyteller figurine by Tim Cordero of Hopi Pueblo and Cochiti Pueblo heritage is very much in the style of his grandmother, Helen Cordero, who was his mentor.  The adult male has his head turned upward just so slightly, his eyes closed and mouth open.  His dark hair is tied in a chonga on the back of his head.  He wears a plain shirt in front but there is a flute player painted on the back.  His trousers are decorated with a painted band around his right leg.

Grasping on to his head are four boys, two over each ear.  Another boy is clasped in his arms and five ride his legs.  Tim chose to have all boys on his figurine.  Each one has elaborately painted clothing.

Tim Cordero [b.1963 ] is the son of the late Jimmy Cordero and his Hopi wife Lenora Holmes. Tim started making pottery between 1979 and 1980, at the age of 16 or 17, while living in Cochiti with his grandmother, Helen Cordero.  Following Helen Cordero’s death in 1994, Tim no longer visited Cochiti Pueblo and therefore no longer made storyteller figurines. Even when Helen was alive, he only visited in summers, so his production during those few summers was rather limited. I do not believe there are many of his storyteller figurines in existence.  This one is signed “Tim Cordero Cochiti-Hopi.”  It is in original condition.