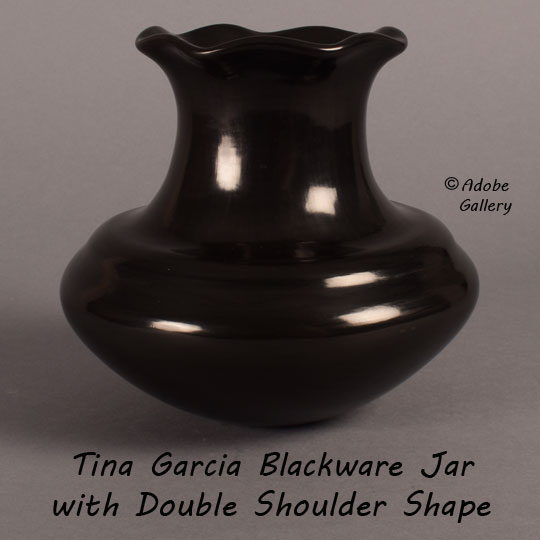 This beautiful blackware pottery jar was made by Tina Garcia of Santa Clara and San Juan Pueblos. At just under seven inches in both height and diameter, it's a smaller piece, but it has a noticeable presence despite the smaller scale. This is likely due to the strength of the form and the incredible high polish seen on the exterior.

The vessel's form recalls those made famous by Santa Clara matriarch Sara Fina Tafoya, but scaled down to about half the size. The raised double shoulder—or "Rainbow Band"—seen on Sara Fina's pots appears here, as does the fluted rim. Here, though, the fluted rim is made to be a bit more dramatic, which feels appropriate for a modern creation. This is a beautiful example of a contemporary artist paying tribute to ancestral forms.

The bottom of the jar is signed Tina Garcia, San Juan / Santa Clara.

Tina Garcia (1957 - 2005) was the granddaughter of Severa Tafoya. Her mother was from Santa Clara Pueblo and her father from Ohkay Owingeh. She learned pottery making from her grandmother and her aunt, Angela Baca. She was producing blackware herself by the time she was eleven. When she decided to become a career potter, she spent time in museums studying the artform. She made pots that honored the traditional forms with a beautifully polished modern finish. The only decoration she used was the traditional Santa Clara bear paw, and she did so infrequently. She received many notable awards during her career and placed her works in major museums.