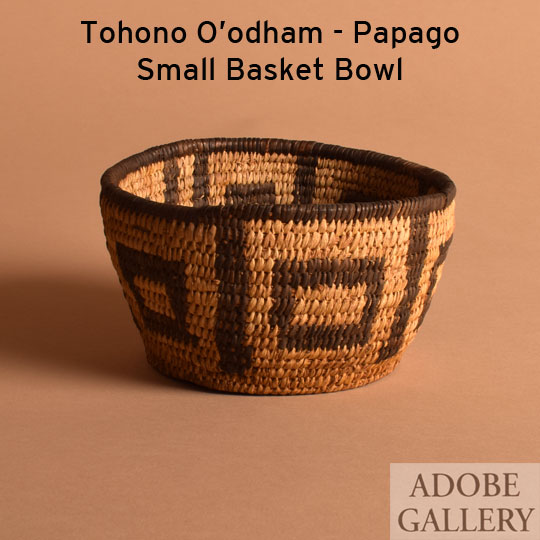 This small, well-constructed, Tohono O’odham - Papago Small Basket Bowl was made in the mid-20th-Century. It is composed of yucca stitched around a bear grass foundation. The square, geometric designs are rendered in devil’s claw. The basket shows evidence of use, as there is an area of worn stitches on the bottom. It does not detract from the outward appearance, which appears both modern and traditional at the same time.

The Tohono O’odham, or “Papago” people as they were called by the Spanish, live in the Sonoran Desert country of southwest Arizona.  The ancient name they called themselves was “Tohono Aw-aw-tam”, or the Desert People. Traditionally most indigenous inhabitants of the Sonoran Desert were basket makers. They used the materials native to their environment, willow, yucca and devil’s claw. Baskets were used for gathering, storage, ceremonial activities and eventually as a source of income.

In the early 20th-Century, as willow became scarce in the desert areas where the Tohono O’odham lived, they began to use yucca, stitched around a bear grass foundation for their baskets. Yucca proved to be easier to weave and allowed for the artists to create items quickly for the tourist market.

Condition: The basket is in good condition, there is a break on the bottom where stitches have become loose, but it does not detract from the overall appearance.

Provenance: From the estate of a former New York client

- Southwestern Indian Baskets: Their History and Their Makers by Andrew Hunter Whiteford

- The Papago Indians and Their Basketry by Terry DeWald

The Papago Indians And Their Basketry
by Terry DeWald