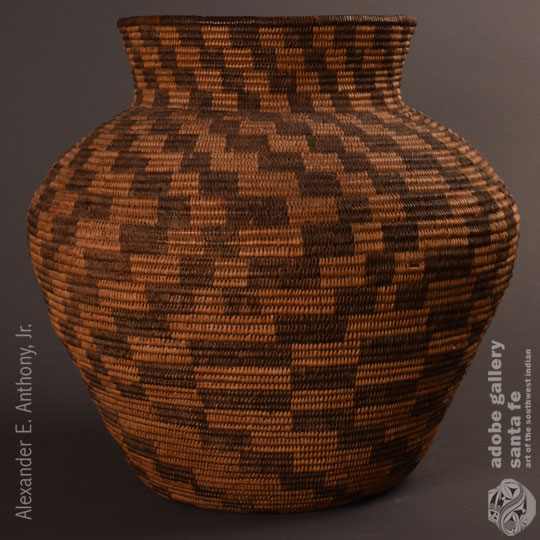 This large Turn of the Century Western Apache Basketry OLLA dates to the turn of the 20th century, circa 1890-1910. It is constructed with a 3-rod willow foundation, and willow and devil’s claw stitching. Horizontal bands of rectangular blocks are arranged in a somewhat checkerboard fashion.  The black design was executed in devil’s claw.

The basketry OLLA has the traditional shape that collectors admire.  The walls rise upward and outward to the widest point and then slope inward and reverse directions again for the neck.  The rim is stitched in devil’s claw.  Amazingly, the bottom of the basket is still in remarkable condition.

The members of the Yavapai-Apache Nation, a sovereign Native American tribe from the Verde Valley, Arizona, have two culturally distinct backgrounds and speak two indigenous languages. The Yavapai originate from Yuman-speaking peoples known as the Pai and the Apache descend from an Athapaskan background like other Apache groups to the East.

Originally, the Yavapai and Apache tribes were separate and distinct tribes who coexisted peacefully for several hundred years. They have existed as one tribal nation since 1934. The Yavapai-Apache Tribal Reservation is located at Camp Verde, about 90 miles north of Phoenix and 50 miles south of Flagstaff, along Interstate 17.  They are generally referred to as Western Apache.

Condition: excellent condition with only a very few missing stitches

Provenance: from a gentleman from Oregon