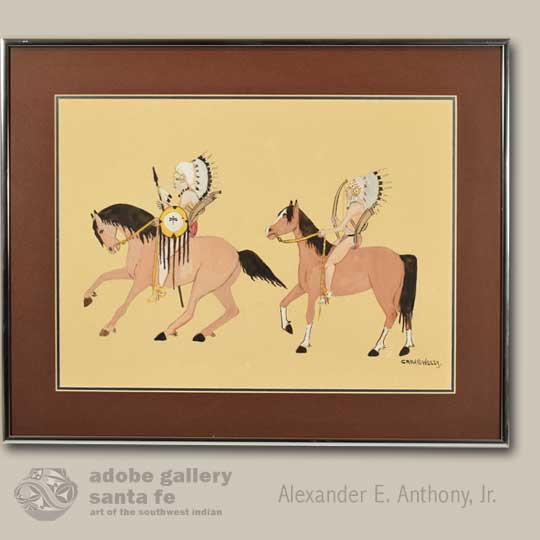 This untitled piece by Arapaho painter and ledger artist Carl Sweezy will likely appeal to those with an appreciation for traditional Native imagery.  It’s a classic image: two warriors on horseback, pictured during what appears to be a peaceful moment. Sweezy’s palette here is muted, his outlines are soft. They’re barely visible, actually, obscured by the soft tones of his subjects’ skin and hair.  He adds small bits of bright color to the warriors’ headbands and mocassins, too, showing respect for the regalia of his people.

As per usual, and in keeping with the style of the Plains and Pueblo traditionalists, particular attention was paid to the warriors’ clothing, weaponry, and accessories. Their war bonnets are highlights, despite (or perhaps because of) their simple, primitive design. Each begins with a wide stroke of white paint. Extending outward from each white mark is a series of black triangles. Painted over the tip of each black triangle is a smaller white triangle, from which a thin, winding line protrudes. These combinations of shapes creatively and effectively form the war bonnets’ feathers. One warrior carries a bow and wears a quiver, the other carries a bow, quiver, spear, and a shield marked with a dragonfly design. Sweezy’s warriors are poised and elegant. His animals are uniquely appealing. Together, they create a wonderful traditional image.

The painting is signed Carl Sweezy in its lower right corner.

Carl Sweezy (1879-1953) Wattan was a talented and influential Arapaho painter and ledger artist. Sweezy was born in 1879 on old Cheyenne-Arapaho Reservation in Oklahoma. His father was Hinan Ba Seth (Big Man) and his mother, unfortunately, died when he was very young.  Sweezy attended Mennonite Mission Schools in Oklahoma and Kansas. He also attended Chilocco and Carlisle Indian Schools. Sweezy’s Indian name was Wattan, or “Black.” He was also known as “Waatina.”  Sweezy’s style was informed by Plains ledger art, which was flourishing during his early life. He occasionally created ledger art and painted portraits, but he is best known today for his excellent watercolor paintings. Sweezy’s long list of notable exhibitions includes the American Indian Exposition, Philbrook Arts Center, and the Intertribal Indian Ceremonials in Gallup. His works are included in the collections of the Smithsonian Institution, Chicago Natural History Museum, Gilcrease Institute, Museum of the American Indian, and University of Oklahoma. Sweezy passed away on May 28, 1953 in Lawton, Oklahoma.

Condition: this Untitled Original Painting of Two Men on Horseback by Arapaho Artist Carl Sweezy is in excellent condition 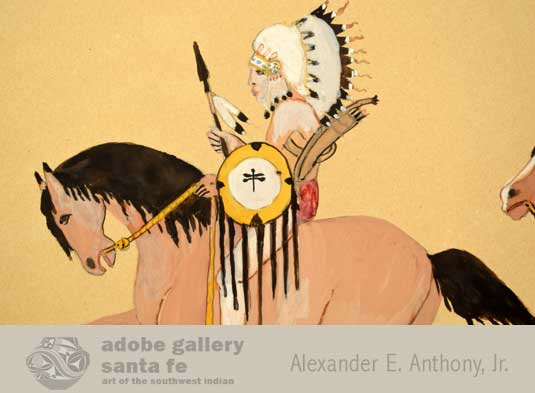