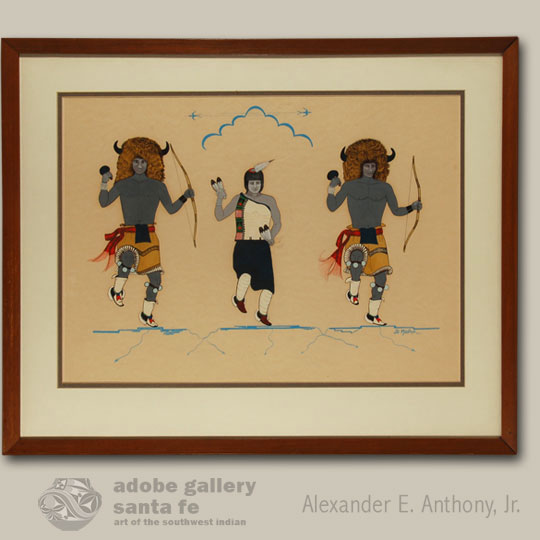 This untitled Zia Pueblo Painting of Male and Female Buffalo Dancers by José de la Cruz Medina was made using the bold, opaque watercolors that are a hallmark of the “Flat Style.”  J.D. Medina places nothing in the foreground or background, adding nothing more to their environment than simple blue lines beneath the dancers’ feet and a blue cloud with two birds flying in opposite direction.  The one major departure from the “Flat Style” is that J.D. Medina painted the dancers head-on, instead of in profile as they would usually be depicted.

José de la Cruz Medina is a well-known painter from Zia Pueblo who comes from a talented family of artists.  His grandmother was Trinidad Medina, who is known to have been one of the best potters at Zia Pueblo during the first half of the 20th century.  His brother was the painter Rafael Medina.

J.D. Medina (b.1935) attended the Santa Fe Indian School from 1949 to 1953, after the departure of Dorothy Dunn and during the tenure of Geronima Montoya.  From there he attended the Institute of American Indian Arts.  He served in the Marine Corps, then returned to New Mexico and lived at the pueblo.  He continued painting easel paintings and acrylic paintings on pottery pieces.

Condition:  appears to be in original condition

Provenance: this Untitled Zia Pueblo Painting of Male and Female Buffalo Dancers by José de la Cruz Medina is from the estate of a former client from New York 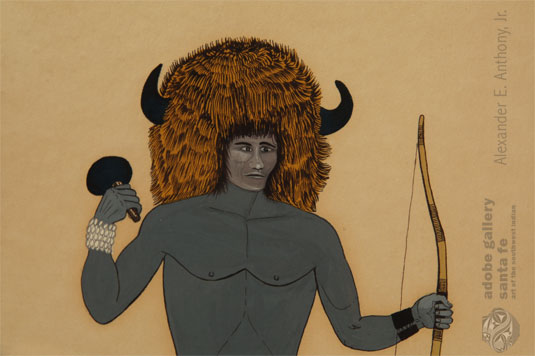