Untitled Portrait of a Native American Man by Walter Bambrook 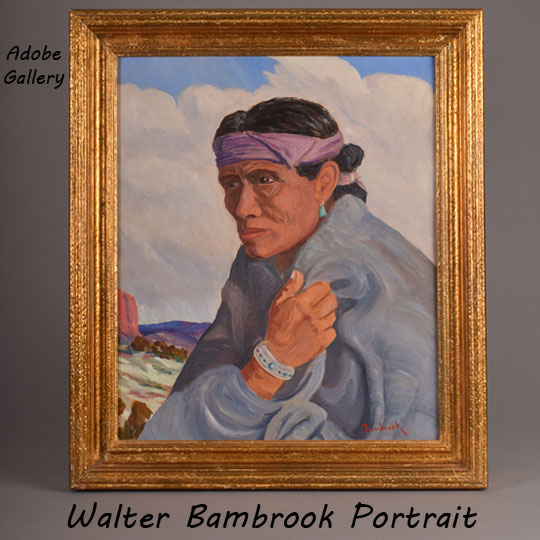 This untitled portrait was painted by Albuquerque artist Walter Bambrook.  It is a sweet image that will appeal to collectors with an appreciation for classic Western imagery.  Bambrook’s subject here is a Native American man.  He’s wrapped in a blanket, shielding himself from the cold air.  Streaks of white covering the ground behind him confirm that this is a winter scene.  Behind him, a massive gray and white cloud formation fills the sky, coating the ground in the distance with a coat of white.

The man wears a silver and turquoise bracelet, an earring, and a purple headband.  His strong facial features and deep-set brown tone lend him an appealing intensity.  He stares off to the viewer’s left.  Perhaps he is relieved that the storm has passed, or maybe he’s facing another incoming cloud formation.  We have handled many of Bambrook’s works over the years, but this is the first portrait we’ve seen.  This is a pleasant deviation from the talented artist’s preferred subject.

The painting is signed Bambrook in lower right.  It is framed in an elaborately designed gold frame.

Walter Bambrook (1910-1984) was a painter who lived and worked in Albuquerque, New Mexico. He attended Albuquerque High School and began his art education at the University of New Mexico (UNM) under the instruction of Ralph Douglas. While at UNM, Bambrook served as a printer's apprentice for the Albuquerque Journal newspaper and began his four-year art training under Carl Von Hassler. After his formal art education was completed, Bambrook taught many private classes and groups at UNM, the Woman's Club and Heights Community Club. He exhibited frequently and successfully during his career and placed his works in many prominent collections. Bambrook died on June 1, 1984 in Albuquerque, New Mexico.

Provenance: this Untitled Portrait of a Native American Man by Walter Bambrook is in private New Mexico collection