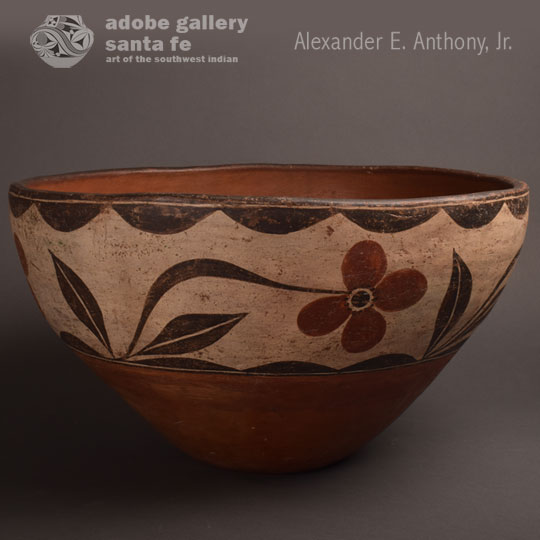 This large and deep historic pottery dough bowl from Zia Pueblo has the attributes of one from the 1890s. It is large, shows evidence of utilitarian use over the period and has a rich patina as a result.

“The large four-petaled red flowers. . . placed on long, curving stems, have other parallels that may be dated before 1887.” [Harlow & Lanmon, 2003:210].  There are many Zia jars from the late 1800s with floral designs so it is not unexpected that the design would be used on dough bowls too.  “The principal lineage of dough bowls at Zia Pueblo is characterized by exterior decorations that developed directly from the water-jar style of design. . .”  [Harlow & Lanmon, 2003:240]

This bowl has the design panel on the upper half of the vessel wall and polished red clay on the lower half.  A very wide—1-3/4-inch—wiped-on red band is in the traditional position of just below the decorated panel. There are four four-petaled flowers at the end of long curving stems, at the base of which is a pair of split-leaf leaves.  A continuous band of dark brown semi-circles is pendant on the top framing line and a similar band rests on the lower framing line.30

Provenance: This dough bowl is published in a room setting in Formal Country by Pat Ross, Viking Studio Press, New York, 1989, page161.  A copy of the book will be provided with the bowl.