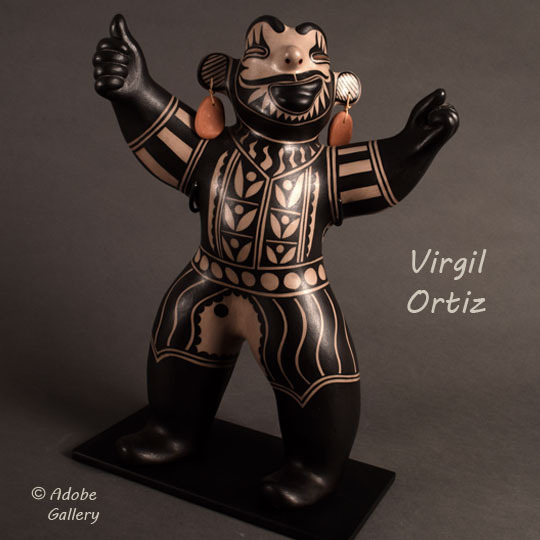 This contemporary Monos figure was created by Cochiti Pueblo artist Virgil Ortiz. Monos figures were originally produced by Cochiti potters from around 1880 to 1920. They depicted the non-native traders, priests, cowboys, performers and tourists who were, at the time, becoming increasingly present in Pueblo artists’ lives. The creation of Monos figures was a form of social commentary and perhaps a coping mechanism of sorts. The sales of these figures were quiet acts of subversion, as the characters depicted in the figures were actually the artists’ target sales market. Museum directors Kenneth Chapman and Edgar Lee Hewitt condemned the figures, refused to exhibit them at museums, and excluded them from the inaugural Santa Fe Indian Market in 1922. Shortly thereafter, production ceased. Interest was revived in the mid- to late-twentieth century, thanks in part to the efforts of the dealers of the era. In the early 1990s, Ortiz began making Monos figures, creating a more modern look while using traditional materials.

This Monos figure dates to 2006. His handlebar mustache and prominent eyebrows nod to historic examples, as does the position in which he stands. He is elaborately and beautifully adorned in clothing that includes designs of the artist’s own invention and a variety of traditional motifs. Highlights include a wavy pattern of thick black lines traveling down his trousers and a cluster of inverted clouds positioned beneath a rainbow on his back. The figure itself was built, shaped and fired with incredible skill and precision. Ortiz’ work with this piece is excellent by any measure.

The figurine’s left foot is signed and dated Virgil Ortiz, Cochiti Pueblo, 06. The figurine has flat feet and stands securely. A black stand, which cradles the piece by its underarms, is included.

Cochiti Pueblo artist Virgil Ortiz (1969-) is one of the most innovative Pueblo artists. He makes traditional figurative pottery, experimental figurative pottery, traditional pottery vessels, and jewelry. He also works in film and fashion design. Ortiz’ work is consistently informed by reverence for that of his ancestors, and all of his pottery pieces are made using traditional methods and materials. Thematically, his work is notably experimental and boundary-pushing; he has managed to confidently and successfully explore a variety of subjects that were previously considered to be taboo. Ortiz is one of the most accomplished and influential contemporary artists, having exhibited internationally and shared Native art forms with a wide audience.