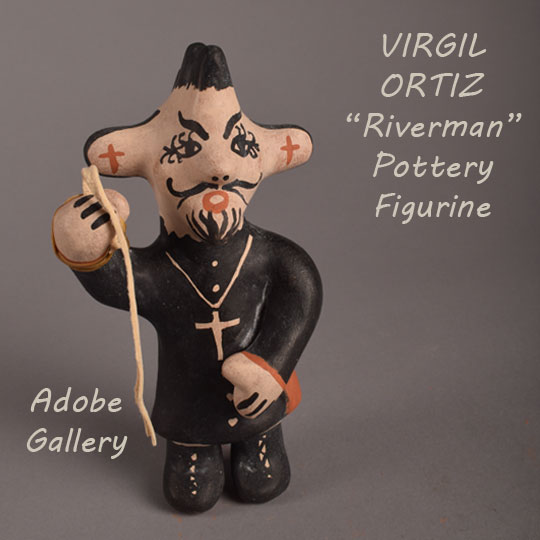 Rivermen may have been inspired by Los Hermanos Penitentes (the Penitent Brothers), a group of Franciscans active in many small New Mexico towns. The figure wears a cross and carries a leather whip, possibly symbolizing the self-flagellation that the Penitentes practice during Holy Week. The beard and mustache are other indications of a Spanish origin for the figurine. The Cochiti Pueblo word for the Rivermen is “ah-wa-roo” and, when pronounced, is almost like the Spanish word, “abuelo,” which means “grandfathers.” The Riverman name probably originated because the figure appears from the Rio Grande, which is east of Cochiti. Its connection to Christianity is tied to the fact that the first house the figure enters is the church. Its connection to Spanish is to the language because it is always prayed in the Spanish language and its conversations are in Spanish.

The Riverman celebration occurs on May 3rd each year at Cochiti Pueblo. The Riverman is a disciplinarian of the children, and they fear him greatly. Children are ransomed with fry bread. Women hang crucifixes made of fry bread around the Riverman’s neck. Children breathe a sigh of relief when the church bell rings, because it means the Rivermen are ready to go home to the River.

Provenance: Originally from the estate of Transcendental artist Florence Pierce of Albuquerque who passed away in 2007 at the age of 89.  Now from the client to whom we sold it in 1992 and now have it back.