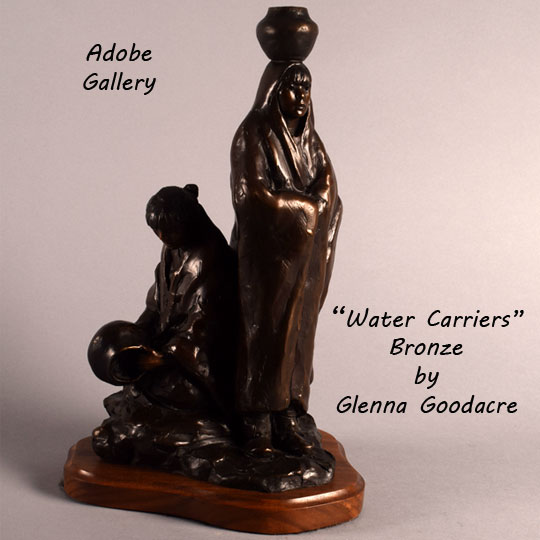 “Water Carriers” by artist Glenna Goodacre depicts three pueblo women.  Each has a pueblo olla, the traditional pottery vessel for storing and carrying water.  One woman holds her olla in front of her chest, another dips hers down to fill or empty it, and the third balances hers atop her head.  Their backs meet at a central point, with each woman facing outward in a different direction.  There is no clear front or back here, which is wonderful, as the viewer can enjoy the piece from any direction.  As usual, Goodacre’s fingers are depicted with both style and sensitivity, in bronze that has a rich, dark coloration and an appealing texture.  This is a fine example of Goodacre’s work with an interesting and admirable origin story.

“Water Carriers” is a bronze sculpture created by notable Western artist Glenna Goodacre in 1992 at an edition of 99.  The edition was made and sold as a fundraiser for the New Mexico Capitol Art Foundation, a nonprofit organization dedicated to collecting, preserving, and displaying New Mexico artworks.  Bronzes by Allan Houser and other notable artists were made and sold for the same purpose. Glenna Maxey Goodacre (1939-2020) was an American sculptor who was born in Lubbock, Texas, and resided in Santa Fe, New Mexico.  Goodacre studied at Colorado College and New York’s Art Students League, beginning as a painter before moving towards three-dimensional media.  She is best known for having designed the Vietnam Women’s Memorial in Washington D.C. and the obverse (or “heads” side) of the U.S. Sacagawea Silver Dollar.  In 2003, she completed Philadelphia’s Irish Memorial, a massive public sculpture made to commemorate the many lives lost in Ireland during the middle of the nineteenth century.  Her works are included in many notable public, private, and municipal collections around the country.

Goodacre’s works have received many prestigious awards and honors, and the artist herself has received many accolades from both her original and adoptive states.  She was inducted into the West Texas Hall of Fame and named 2008’s “Notable New Mexican” by the Albuquerque Art and History Museum.  She received honorary doctorates from her alma mater, Texas Tech University.  Unfortunately, Goodacre suffered a major head injury in 2007. She recovered well and eventually returned to work, though not without complications.  Goodacre officially retired from sculpting in 2016. She is considered by many to be one of the best and most important sculptors of her era.

Provenance: "Water Carriers" Bronze by Glenna Goodacre is from the estate of a New Mexico family