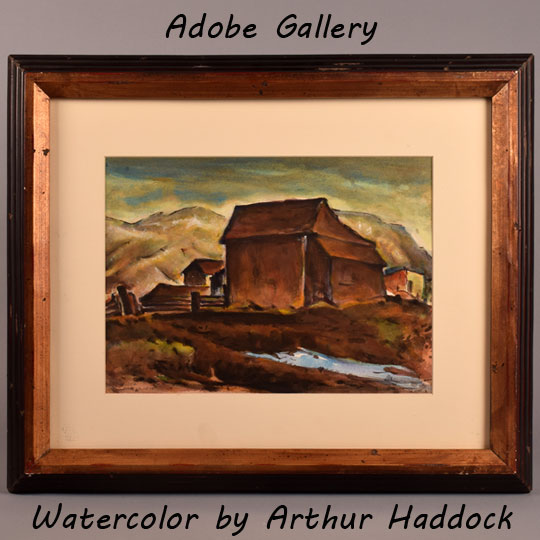 This excellent watercolor painting was created by Arthur Haddock.  It features a group of buildings perched atop a small hill.  The building nearest the viewer occupies the center of the image, while several smaller ones spread out around the area behind it.  A fence winds away from the large building’s walls. In the foreground, a small stream runs through the brown earth.  In the background, a mountain range extends into a dramatic sky.

The houses and the earth upon which they sit are composed with a palette of earthy browns and greens.  The mountains and sky in the background are made mostly of blues and yellows.  Each area contains hints of the colors used in the other area, unifying the image’s two halves.  Haddock’s brushstrokes are soft and broad, with thin black lines added to define the edges of the buildings and the tops of the mountains.  This is a dreamy and beautiful image from an artist whose work we have not previously handled.  We hope to see more of Haddock’s works in the future.

The painting is signed Haddock in lower right.  It is numbered and dated “#1054, Jan. 12 1975” in lower left.  It is framed under acrylic in a wide frame.  The off-white mat board works very well with Haddock’s dark watercolors.

Arthur Earl Haddock (1895-1980) was an American painter.  Haddock was born in California and ultimately settled in Santa Fe.  Haddock met and befriended Maynard Dixon in 1914 and became Dixon’s mentee.  The majority of Haddock’s art instruction came from Dixon.  Haddock showed his work only occasionally, while earning his living first as a railroad employee and then as a framer.  He kept most of his paintings.  When he died in 1980, his home contained hundreds of his works.  He is known primarily for creating desert landscapes.

Condition: excellent condition. The frame has some small scratches and abrasions

Provenance: this Untitled Watercolor Painting by Arthur Haddock is from a private collection