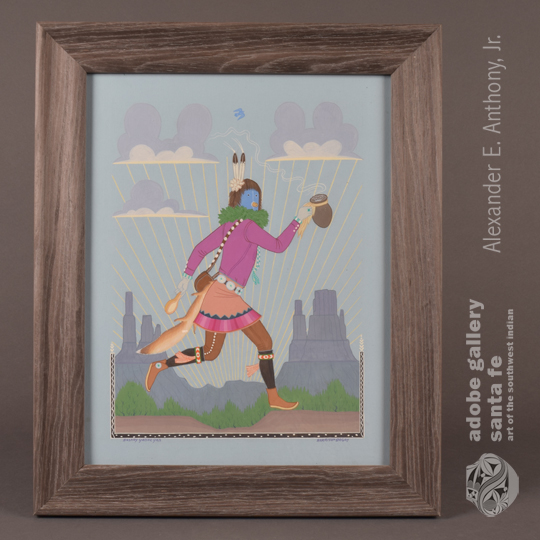 J.J. Brody’s Indian Painters and White Patrons provides an excellent description of the Santa Fe Indian School’s relationship to the world of traditional Diné painting: “The Meriam Report of 1928 included a recommendation that the government encourage the development of native Indian art. The Santa Fe Indian School was selected to become the first training center for Indian arts and crafts, and by 1931 it had an arts and crafts building . . . Virtually all of the important Indian painters of (instructor Dorothy Dunn’s) generation came under her guidance or were taught by her students, and, in turn, they taught most Indian artists of the succeeding generation . . . It was Navajos who became most closely identified with The Studio. Except for some minor individual variation, Studio painting by Navajos was no different from that of students from other tribes, although the Navajos did develop a specialized subject matter. Their identification with Studio painting was the result of the contributions they made to its visual formulation and, later, of the sheer weight of their production. Of the twenty-nine significant painters from thirteen tribes trained at the Studio, seven were Navajo. Later, of thirty painters from fourteen tribes who relied on the sale of paintings for a major portion of their total income, five were Navajo. Four of these, Harrison Begay, Gerald Nailor, Quincy Tahoma, and Andy Tsinajinnie, among them probably painted and sold more pictures than all of the other Studio alumni combined.”

For a detailed description of this painting by Harrison Begay (1914-1912), we consulted with Myron Denetclaw.  Myron, a young Diné painter who creates works that are strongly influenced by Begay’s, kindly provided the following information: “This yei is an ordinary dancer. Moccasins, black knitted socks, woven leggings, pants, skirt, fox pelt, silver belt, western shirt, etc.  He carries a Navajo pottery jar of brewed herbs and a gourd dipper, probably for a patient. The black bars below represents storm clouds, the dots are water droplets and the zigzag line is lightning connecting to a plant. This is an early morning scene, judging by the lines of the sun rays and light reflecting on the clouds, and an aerial perspective of Monument Valley rock formation. For Begay’s paintings, he has creative freedom with how he wants to paint the yei dancers.”

This excellent painting dates to the 1970s.  It is signed “Haskay Yahne Yah” in lower left, and “Harrison Begay” in lower right.

Condition: this Watercolor Painting of Single Yei Figure is in excellent